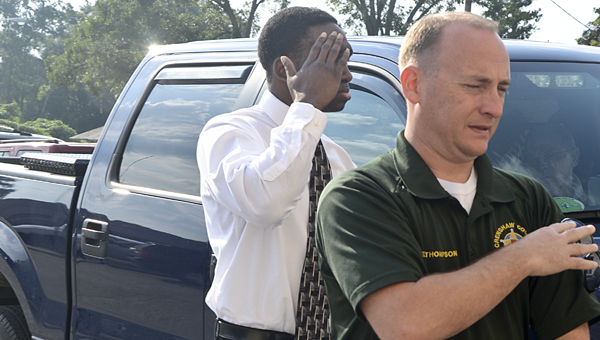 Antonio McNear covers his face as he is led into the courthouse by Deputy Earl Thompson.

McNear was charged with capital murder, but after more than four hours of deliberation, the jury returned a guilty verdict for three counts of intentional murder, which is a reduced charge.

The penalty for capital murder includes life in prison without parole or the death penalty, but intentional murder, attempted murder and first-degree robbery, all Class A felonies, each carry a sentence of 20 years to life.

“We’re pleased with the jury’s decision,” said District Attorney Charlotte Tesmer, who led the prosecution. “We’re going to ask for the maximum sentence.”

Tesmer said the State was aware of the possibility of a reduced charge when there is an accomplice situation.

John Lewis Thomas, Jr., who authorities believe was the shooter, was convicted of capital murder in the case and sentenced to life in prison without parole in February.

“We obviously have mixed feelings.  We’re disappointed that he was convicted, but given the nature of the offense, we’re thankful he was not convicted of capital murder,” said defense attorney Susan James. “We’re going to regroup and see where to go from here.”

During closing arguments, Tesmer argued that McNear and Thomas went to Kelley’s Grocery that day with the intention of robbing it.

Tesmer said that McNear was the one who took the cash register while Thomas was firing at the escaping Betty Kelley.

“There was no time for Thomas to shoot at Betty and then go back to get the register,” said Tesmer, who said that eyewitnesses passing by moments later saw Thomas standing by the truck but didn’t see a cash register. “It doesn’t make sense.  There was no time for that.”

Tesmer said that McNear and Thomas split the money, disposed of the cash register and made several stops at family and friends’ houses that afternoon.

James contended that McNear was cooperative with law enforcement, but Tesmer said that he had ample opportunity to use a phone to call police when he was out of Thomas’s presence.

Tesmer also said that in one of McNear’s statements to law enforcement, he received a number of phone calls from Thomas after the robbery, in which Thomas said, “If you don’t tell on me, I won’t tell on you.”

“What is there to tell if you haven’t done anything?” Tesmer said. “These are not the actions of an innocent man.”

Much of the discussion in closing arguments centered on a check returned for insufficient funds that was found on the floor of the store in front of the register.

The check was from Thomas’s deceased mother, and James said that may have been what led Thomas to murder.

James said bad checks were kept by the register and that Betty Kelley testified that the store’s policy was to ask for payment from customers who had written those checks when they came in.

“Could Charles Kelley have said, ‘How about this check?’” James said. “We can only speculate.  We’ll never know.”

James said that Thomas was unstable and McNear feared for his own safety.

She reminded the jury that they would have to convict McNear of capital murder as an accomplice who was also responsible for Thomas’s actions, and added that McNear was asked if he tried to stop Thomas during an interview.

“ ‘He had a gun.  He probably would have shot me too,’” was McNear’s response, James said. “Use your own judgment in the case of a killer who knows where you live.”

James also said that much of the case is based on what McNear said and law enforcement used information from his interviews to conduct the investigation.

“McNear fully cooperated.  He did everything he could to help police,” she said.

In the state’s final statement, Levi Nichols argued that the case was not about Thomas or what may have been an impulsive act by him.

“They planned it,” he said. “He did more than just be present at the scene of a crime — he helped plan it and participated in it.”

Sentencing for McNear is set for early October.