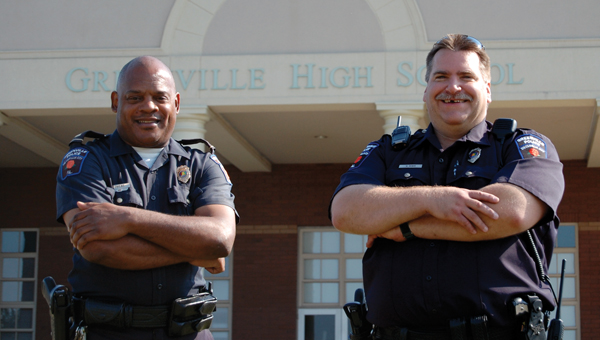 Between the classroom bells, Officer Van Sims has students filtering in and out of his office just to say hello.

While it may seem like a simple hello, Sims knows it’s so much more.

After being a part of the School Resource Officer program for the past year, Sims knows that a student saying hello means relationships are being built and a sense of safety lingers in the halls.

Sims and Lt. Malcolm Owens are part of the School Resource Officer program that was created in the late 1990s by Mayor Dexter McLendon and Greenville Police Chief Lonzo Ingram.

Owens, who has served a resource officer for 12 years, began at GMS and now works at Greenville High School.

“We are certified police officers,” Owens said. “Combined we have 58 years of total experience. We were placed in schools to keep order and maintain a safe environment.”

A common misconception is that having an officer placed at a school means there is a problem with safety.

“As a whole, the public perception of a resource officer in the school tends to make one think that the school is bad or terrible when in fact it is not,” Owens said. “The benefit of having school resource officers is we are able to be hands on and explain the laws and other procedures to help educate the public at large.”

By creating that link between the police department and the school, the resource officer works in many different avenues to keep various elements running smoothly.

A typical day for the resource officers begins at 6:30 a.m. and can go until the early hours of the next morning.

“We have kids that we have to go and encourage to come to school,” Owens said. “We monitor school bus activity in the mornings, we work traffic, we assist patrol officers on the streets, we counsel kids, we mentor the kids and we teach law-related subjects in the schools.”

Other responsibilities include conducting parent conferences, visiting the Butler County Juvenile Probation Office to talk to at-risk students, working all school events, acting as a bank escort for cash deposits, traveling with school’s athletics teams and monitoring the hallways daily.

The program has received six Safe School awards and has successfully kept the juvenile crime to a minimum, according to Owens.

“It appears that most people think we’re just a police officer trying to get off the streets,” Owens said. “When in essence, we’re there to speak to the kids on issues that affect them every day. Overall, we just try to build relationships with all the stakeholders. A school resource officer is instrumental in providing a safer environment conducive to the learning process.”

For Sims and Owens, being a resource officer is more than just a job — it’s a calling.

“It’s a calling that we both acknowledge and accept because not all police officers will choose to work in the schools,” Owens said.