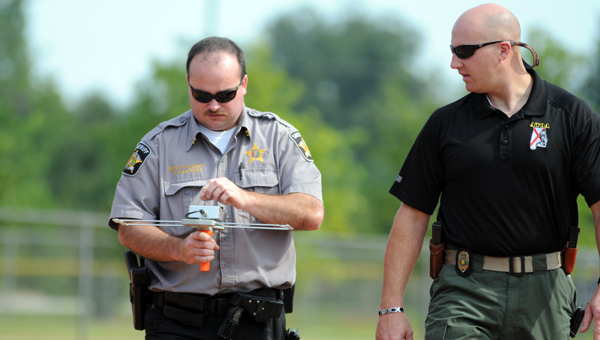 The man was reported missing at 9:30 a.m. By 9:45 a.m. he had been located in the woods behind the Greenville Softball Complex.

The search was part of a training exercise for the BCSO and the GPD. The exercise also served as a demonstration of the new Project Lifesaver equipment that was recently purchased by the BCSO.

Project Lifesaver is a company that provides training and resources that help agencies, such as the BCSO and the GPD, search for individuals with Alzheimer’s, autism, Down syndrome, dementia or other cognitive conditions. Citizens enrolled in Project Lifesaver wear a small personal transmitter around the wrist or ankle that emits an individualized tracking signal. If an enrolled client goes missing, the caregiver notifies their local Project Lifesaver agency, and a trained emergency team responds to the wanderer’s area.

At Wednesday’s training exercise, a bracelet was placed on Sheriff’s Deputy Jim Rhodes, who then hid in the woods behind the Greenville Softball Complex. Chief Deputy Joe Salter, Lt. Heath Killough, Capt. Anthony Barganier and Sgt. Curtis Miller, who will serve as the BCSO and GPD contacts for the program, were then called in to conduct the search.

“This search was over in 15 minutes,” he said. “If we had done the same exercise without the Lifesaver bracelet, it would have taken about four hours to locate the missing person. Instead of just following the signal to his location, we would have started by searching all of the woods in the area, and we would have had to search every building and every dumpster as we made our way through the area. With the bracelet we were able to walk right to his location.”

“This is a very good deal,” he said. “This is the kind of equipment that will help save lives.”

The BCSO was able to purchase the equipment thanks in part to $2,000 donation by friends and family of Billy Heartsill. Heartsill, a Butler County man that suffered from dementia, was reported missing in April. After a 10-day search, Heartsill’s body was found a half a mile from his home on Rocky Road under heavy brush in an area that had been searched by dozens of law enforcement officers, volunteers and the Alabama Forestry Commission’s K-9 unit.

“That was a very sad case,” Harden said. “If Mr. Billy had been wearing one of these bracelets things might have turned out differently. These (bracelets) are life savers.”

The bracelets emit a signal that can be picked up for a mile on the ground and five miles in the air. Each bracelet has its own frequency, which can be programmed into the receiver to allow authorities to track the missing person. According to Harden, the BCSO has the equipment to track up to 300 bracelets.

The bracelets cost $300, and the BCSO currently has four bracelets and two receivers. Harden said the BCSO would ask for donations of $300 to cover the cost of the bracelets.

“We’re asking for the families to pay for the bracelet, but if they can’t afford it, we’ll find a way to get them one,” Harden said.

The BCSO will also cover the monthly costs of changing out batteries and bands on the bracelets. Harden estimates that cost to be $6 per bracelet, and if necessary, the BCSO will use funds from its annual rodeo to cover the costs of the program.

“There are costs that we’ll have to pay each month, but if it saves even one life, it’s worth every penny,” he said.

Harden said anyone wishing to make a donation toward the cost of the program or equipment can send a check to the BCSO. The check should be made payable to Project Lifesaver.

“We’ll forward the check on to them and they’ll put it in our account,” he said. “When we need equipment or bracelets, they’ll place our order and deduct the money from our account.”

Harden said only those with a documented medical condition such as Alzheimer’s, autism, Down syndrome, dementia or other cognitive conditions will be enrolled in the program.