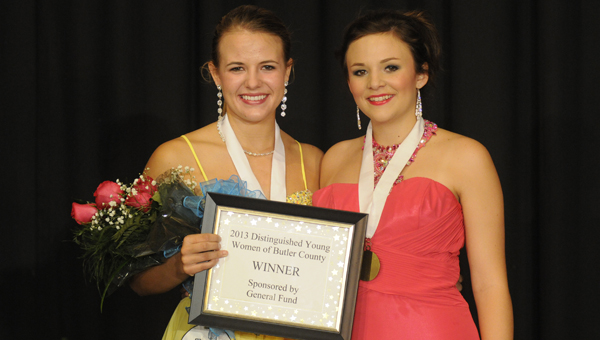 Seven young women took part in the program, which awards $4,200 in scholarship money to the winners.

Matthews walked away with about $2,000 in scholarships. As Butler County’s Distinguished Young Woman, she received a $1,500, as well as two $250 scholarships for winning the fitness and talent portions of the competition.

“It was really a rewarding experience,” Matthews said. “It was really an honor to be chosen. I have been working toward that process for a very long time.”

Tori Bailey was the first-runner up and received a $1,000 scholarship.

Second runner-up and the winner of $500 was Theresa Scott, who also took two $250 scholarships in the self-expression and scholastics portions of the competition. Irina Seal took the essay and spirit awards, each worth $100.

Matthews and Scott also received the Chancellor’s Award from Troy University, which is a full tuition, four-year renewable scholarship, according to Starla Jones, chairman of the board of directors for the Distinguished Young Women of Butler County.

For Matthews, it was in second grade that she knew she wanted to take the title after watching her cousin become Junior Miss, the former name of the program.

The program features a variety of events, including talent where Matthews performed “Malaguena” by Ernesto Lecuona on the piano.

“I chose my piano piece about two years ago, and I have been practicing that piece for about two years,” Matthews said. “It was originally a five-minute piece so we had to cut it down to about one minute and thirty seconds.”

Matthews has been practicing for months in preparation for the competition, but the practicing didn’t stop on Saturday.

She will go to represent Butler County in the Distinguished Young Women state competition that will take place in Montgomery in January.

“I’ll have to keep watching the news, keep practicing the piano and keep up the physical part of it,” Matthews said. “I’m really looking forward to meeting all of the other girls there. That’s what I’m really excited about.”

Close friend and 2012 DYW Barrett Leverette didn’t just give Matthews her medal on Saturday, but she also gave her encouraging words.

“Barrett and I are really close friends,” Matthews said. “I watched her last year win, and I was so happy for her. This year on stage she gave me the medal and she just said, ‘You’re going to have the best time of your life. It’s going to be so much fun.’ I know she has a lot of stuff to tell me. It will be a lot of fun.”