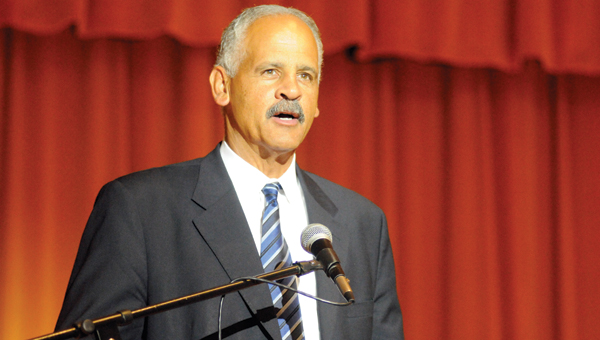 About 6.5 billion people are in the world and most of them are stuck in a box, according to Stedman Graham.

Many recognized Graham at Monday’s Butler County School System Institute as the man who commonly stands next to long-time girlfriend Oprah Winfrey.
However, Graham has learned over the years to define himself as an author who has published novels landing on the New York Time’s Best Seller list as well as someone who has written a best seller called You Can Make It Happen: A Nine-Step Plan For Success.

On Monday, Graham played on the School System’s theme of “Exceeding Expectations.”

People are continually placing themselves in many boxes and being defined either through race, religion, jobs, family, and much more, Graham said.

“The missing piece for a lot of people today is they forget to t-h-i-n-k,” Graham said. “They’re not conscious of their ability to exceed expectations because they don’t think.”

At the age of 13, Graham found he had to define himself at a young age by breaking away from the shame of having two disabled brothers in his family.

After receiving several scholarship opportunities to attend college, it was his mentor and a man he admired telling him, “Son, you’re not going to no college. Your family is too stupid and you’re too dumb,” that ultimately pushed him to be somebody.

“If you’re looking for freedom, you won’t find freedom on the outside, freedom is on the inside,” Graham said. “Freedom is about 24 hours, and we are all equal because everyone has 24 hours, but the question is what do you do with your 24 hours?”

The speech was not just about freedom, building self-confidence or moving outside of the box, but it was ultimately defining an identity to become a leader.

With a vision, a plan, rules of the road, stepping in to the outer limit, coping with change, building the dream team, making a choice and committing to a vision, Graham said anyone could become a leader.