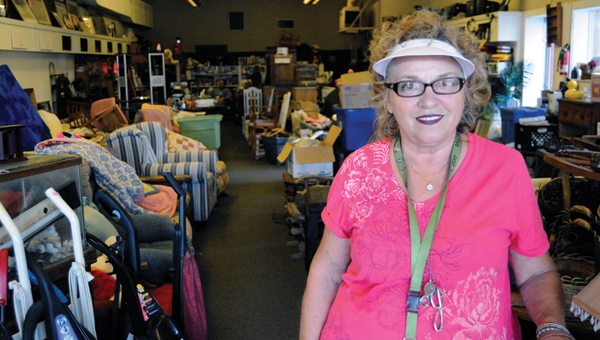 With the recent move of her business, Chip & Ms. Jean’s Gold Buyers & Treasures, to downtown Greenville, Payne said she feels better about her merchandise being safe.

Because the majority of Payne’s store was outside, furniture, mirrors, household items and other products were exposed to the elements and too many items were becoming dry rotted and moldy.

“A lot of the merchandise was getting ruined, and we had to throw a lot of it away,” Payne said. “This building makes me sleep better at night, because it’s protecting all of the stuff that is here. We can keep it clean and people can look at it because there is plenty of room for it to be spread out.”

The uniqueness of the building appealed to Payne, because of the antique-feel she is looking for as the theme of her store.

“I think downtown needed a facelift and it needed something to catch peoples’ eyes,” Payne said.

However, Payne was not always so confident with the thought of moving her business from Fort Dale Road to downtown Greenville.

“So many people were saying, ‘You don’t want to go downtown,’” Payne said. “People were discouraging me saying that, ‘This person or that person went into business and they’re not in business anymore.’ My business was pretty good except I was overcrowded and I thought if I came downtown my business would go down.”

However, Payne knew she had to make the move for the sake of her merchandise and had to hope her customers would follow.

“I didn’t have anywhere to display the things I had,” Payne said. “I looked into this building and it’s working really well to show exactly what we do have, because people didn’t realize how many different things we do have in the store. It’s been going over pretty well.”