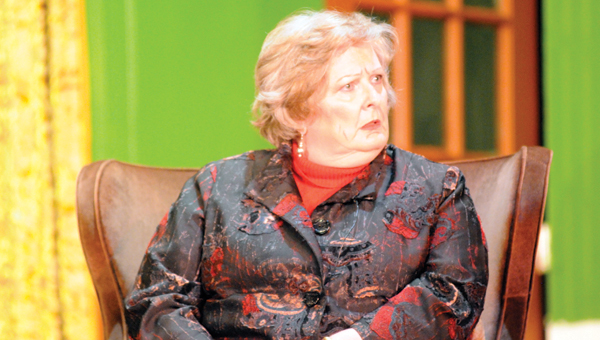 Agatha Christie’s classic whodunit, “The Mousetrap,” is coming to the Ritz Theatre stage Friday, and audiences are in for a guaranteed thrill ride full of twists and turns right up until the very last scene.

One of the stars of the production is Dr. Harriet Foshee of Complete Family Visual Care, a talented actress who would be just fine quitting her day job.

Despite the relatively grim subject matter — it is a murder mystery, after all — Foshee said that viewers might walk away with quite a few more laughs than they’d think.

“There are a lot of funny lines in it, actually,” Foshee said. “I think everybody thinks it’s all a gloom-and-doom murder mystery, but it’s very comical too, in places.”

But one character that likely won’t be putting a smile on anyone’s face is Foshee’s own, Mrs. Boyle. A contrarian in every sense of the word, Mrs. Boyle is described as a generally unpleasant person who is unhappy with nearly everything and everyone.

Foshee said that, in stark contrast to the typical roles she plays, it was a difficult adjustment.

“It’s very hard to be nasty to people all the time, especially the nice people that I’m doing the play with,” she added.

Foshee said that while there wasn’t any one thing about the production that drew her to it, working with such a wonderful cast was a huge plus.

“John Cardy is the director, and he has been fabulous to work with,” Foshee said. “He is so encouraging and he has so many really good ideas.”

But at the end of the day, it’s Foshee’s love for theater that keeps her coming back time after time, despite a demanding day job.

“I’m the oldest person in the cast, and my energy is not what it used to be, so I’m going home tired every night,” Foshee joked. “But I still love it.”

The curtain will rise on “The Mousetrap” at 7:30 p.m. Friday and Saturday.

Tickets cost $15 for adults and $10 for students. They can be purchased at The Pineapple and at the door.