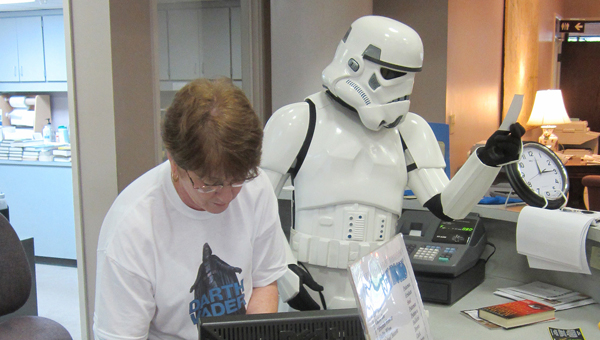 Last Saturday brought Star Wars enthusiasts of all ages to the Greenville-Butler County Public Library for some fun, food and games to celebrate “Star Wars Day.”

“We had a great turnout,” said Director Kevin Pearcey. “I think everyone, both young and old, enjoyed it.”

The day kicked off with a special Jedi Training Academy for ages six to 11. Twenty young apprentices (“Padawans” in Star Wars speak) earned the title of Jedi Knight. As the sound of John Williams’ famous musical score filled the air, the Padawans were marched into the training center where they were awarded their own lightsaber.

“Pool noodles make great sabers,” said Pearcey. “Slice them in half, add duct and electrical tape to the hilt and bam! Instant lightsaber.”

After taking part in some quick lightsaber training, the Padwans headed outside for some agility training and then had to sharpshoot their way through a squadron of Stormtroopers. Afterwards, the Padawans divided into three teams and formed a ‘bucket brigade’ to free Han Solo from his carbonite prison. Finally, each would-be Jedi had to face their fear, descending, alone, into the Cave of the Sith to battle the Sith Lord Darth Maul. Mission complete, the Jedi Knights were awarded certificates recognizing their accomplishments and were then able to enjoy some Star Wars inspired food like “Vader Veggies,” “Death Star Donut Holes,” “Wookie Cookies,” and “Yoda Soda.”

An Imperial guest briefly brought a halt to “Star Wars Bingo”: Stormtrooper TK-5802 (Jacob Simpson) of the famed 501st Legion who posed for pictures with fans and even brought an extra blaster for the fun.

“I can’t say enough about Jacob and the enjoyment he brought,” said Pearcey. “He took our ‘Star Wars Day’ from good to great!”

“But probably next year it won’t involve me in a Darth Maul mask and a Jedi robe outside in 100 degree weather,” he said, laughing.