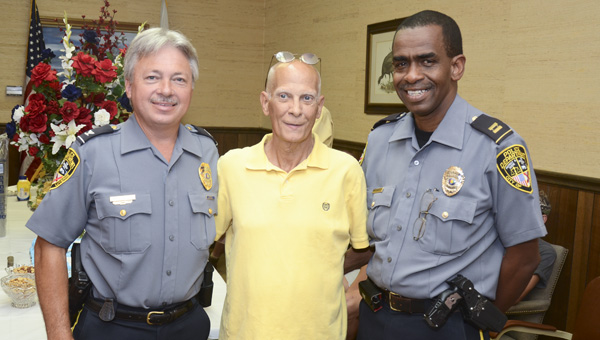 Luverne Police Chief Paul Allen said that Billings has had a key role in a number of different areas for the city, including grant writing and working as the city’s only Drug Abuse Resistance Education (DARE) officer.

“He’s been instrumental in teaching kids and helping teachers,” Allen said. “We also owe him a debt for writing grants — we have three police cars with light bars that we wouldn’t otherwise have.”

He was presented with his badge and service weapon, in addition to commendations from the Luverne City Council, at Friday’s reception.

“On behalf of the mayor and city council, we offer our congratulations and we certainly hope our young officers can learn from the dedication he has shown,” said mayor pro-tem Charlie Johnson.

Billings also had some advice to offer other officers.

“I tried to police the way I would like to be policed,” he said.

Billings shared several stories from his time in service, and he also thanked his family.

“It takes a special family for you to be a policeman,” he said. “You miss a lot of Thanksgivings and Christmases, and there’s no such thing as a holiday.”

Billings said that his health played a role in his decision to retire.

“There comes a time when you’ve got to look and ask if your health is more important than your job,” he said.

Allen said that Billings’s service to the city has been invaluable.

“Ed has been good for the city of Luverne,” he said.

“David has been with the police department a good while now in the patrol and investigations divisions, where he’s proved himself,” Allen said.

“I’m honored,” Sankey said. “I want to continue to make Luverne better as the friendliest and safest city.”