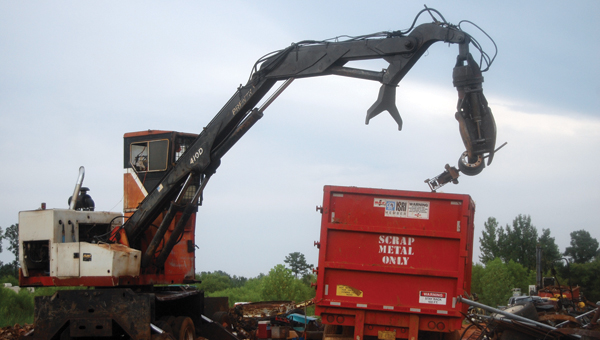 Local scrap and salvage businesses expect a new law aimed at preventing metal theft to cause a slow down in their business. (Advocate Staff/Jonathan Bryant)

A recent law passed by the Alabama Legislature aims at cracking down on metal thieves throughout the state, but it may have an even larger effect than intended.

Sellers must now be photographed, provide a copy of their identification card and give vehicle information to buyers.

Buyers must then submit the information to a newly established statewide database.

Some scrap yard owners around the state are arguing that this law may slow business to a halt, or even stop productivity altogether.

Manager Gerald Mullen of Butler Scrap and Salvage said that while the new laws are certainly strict, they aren’t drastically different from what they’ve been doing beforehand.

“We always made a copy of driver’s licenses and kept copies of tag numbers,” Mullen said. “That was required by the Butler County Sheriff’s Office, and we’ve been doing that ever since we’ve been open.”

However, there is little doubt that the newly enforced requirements of photographing, documenting and registering each individual seller of metal will inevitably affect the flow of the business transaction.

Mullen said that he doesn’t think the new law will put them out of business, but it will probably have an overall negative impact.

He does, however, think House Bill 278 is addressing the correct issue — thieves who have been reported for stealing everything from manhole covers to graveyard markers, in addition to the typical air conditioning coils and other metal items to be sold for scrap.

“But the people that do it legitimately, that’s who it’s going to hurt,” Mullen said. “And that’s the majority of our business.”

But the new law will hurt offenders even more.

Depending on the severity of the crime and whether it is a repeat infraction, violators are subject to anything from a Class B misdemeanor (up to six months of prison time and a $3,000 fine) to a Class A felony (up to 99 years in prison and a $60,000 fine).

Mullen is hopeful that the potential repercussions will deter criminals, but he’s sure they won’t prevent them altogether.

“A thief will find a way around it,” Mullen said. “I don’t know how they’ll do it, but they’ll find a way.”

In the grand scheme of things, Mullen thinks House Bill 278 is neither a good nor a bad thing, but something in between.

“If it saves one church from getting their air conditioner stolen, then it’s worth it,” Mullen said. “It’ll put a lot more work on us, but we can handle it.”