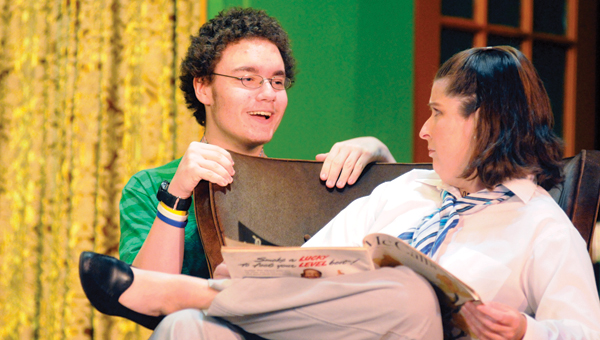 Murder has struck Greenville and Sgt. Trotter is on the case.

Sgt. Trotter is not a member of The Greenville Police Department or the Butler County Sheriff’s Office. Instead, he is a character being played by David Caddell, who is one of the eight members in the Greenville Area Arts Council performing “The Mousetrap.”

“The Mousetrap” is an Agatha Christie novel that has come to life to showcase a variety of eccentric characters that have been snowed in at a local guesthouse.

However, as the truth begins to surface about the geniality of the guests, the characters soon learn they’re staying with a murderer.

“Throughout the show, you find out that one of them is a murderer and to top it all off, he or she has prearranged himself or herself to be there knowing the past of some of these guests,” Director John Cardy said. “They get snowed in and begin to get trapped like rats. That’s where the name of it comes from.”

“The Mousetrap” is the longest running show in history.

Originally premiering in 1952, the show has been performed continuiously ever since in venues across the world.

“I talked to a lot of people last year after we did ‘Steel Magnolias’ about what they would want to see this year, and a lot of people said they wanted to see a murder mystery,” Cardy said. “I thought what better than the longest running play in the world. Agatha Christie is the greatest murder mystery novelist of all time. Her books are only outsold by the Bible and Shakespeare.”

Some new faces will accompany returning actors to put the play on, which will be Aug. 10 and 11 at the Ritz Theatre. The curtain will go up at 7:30 both nights with a reception before hand at 7 p.m. on opening night. Tickets for the reception are $20, regular adult tickets are $15 and student tickets are $10 and can be purchased at The Pineapple.

“I look forward to exposing this to Greenville,” Cardy said. “A lot of people, even though they have heard of Agatha Christie, are not as familiar with her plays. This just brings a unique culture to Greenville.”