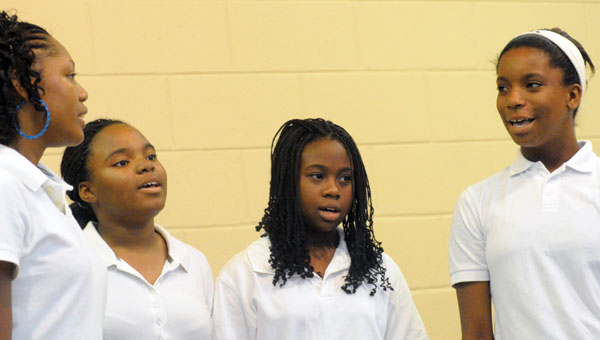 Members of “The Praise Team” sing a song as part of the talent show performance with S.O.C.Ks. Pictured from left to right are Johnette Blake, Cheriunti Grandson, Erika Perdue and Shamoneti Rhodes. (Advocate Staff/Patty Vaughan)

A simple drumbeat accompanied by singing voices could be heard echoing through the walls at the Greenville Police Department on July 25.

Children of all ages were dancing, singing and even playing the harmonica as part of the talent show for the S.O.C.Ks Club, or better known as Saving Our Community Kids.

This summer was the official kick off of the program, which creator and founder Cherrie Lawson hopes to make a permanent staple in Greenville.

Lawson originally founded the nonprofit organization in 1998 in effort to keep kids off the streets, but moving to college and getting settled in life took her away from her goal for a short time.

“I started the program because one day me and my best friend were at a football game in 1998 and behind us, I heard two little boys saying how (many drugs) they had sold,” Lawson said. “It broke my heart, and it really made me sad. I told my friend that I wanted to start a program for kids to help them get off the streets and to keep them out of trouble.”

For eight weeks in the summer, children have been visiting the Greenville Police Department and taking part in games, snacks and education.

“(The program is) educational and biblical,” Lawson said. “We do games, we talk about drugs and the police department came and talked to them about bullies.”

With no funding to support the program and no fees for the children to join, Lawson continues to pay out of pocket for every supply needed.

Lawson’s hope is that the program can stay at the police department and hopefully can become a year-round program.

“We’re praying that the chief of police will let us stay or that we find a building to help us go year round,” Lawson said. “Some kids have nothing to do, some kids need help with homework and some need something to do on the weekend. They need something to do here, because there is hardly anything to do in Greenville.”

S.O.C.Ks works in conjunction with the Summer Feeding Program put on by the City of Greenville. After each child receives a free lunch, they were welcome to attend the summer program that officially ended on July 27.

“It has really been a blessing,” Lawson said. “Kids really like it and parents are very involved, which his a big plus.”