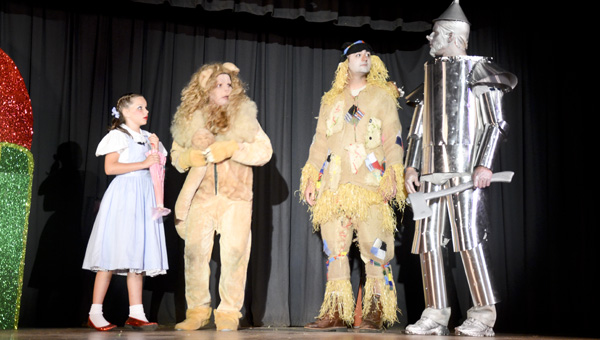 Members of the Highland Home community are offering local residents a chance to travel over the rainbow with a production of “The Wizard of Oz” this Friday and Saturday night.

The play is a fundraiser for the Highland Home Literacy Program, and the goal is to purchase 30 iPads on a traveling cart for use at the school.

Melanie Matthews said that the Literacy Program has held several other fundraisers in the past, such as a 5K run, and a community play was a natural choice.

Dean Kelly, the pastor at Highland Home Church of Christ and professor at Faulkner University where he is also involved in the theater department, is directing the play.

Besides helping raise money for the Literacy Program, an emphasis on the arts is another effect of the production.

“There used to be a drama club at school,” said Matthews, who added that band and the music program is currently the main art outlet at school. “This helps bring drama to the area.”

“I think this is the first time Highland Home has done a true community play,” Kelly said.

Volunteers have worked with Matthews and Kelly and pitched in to build sets, make costumes, and learn lines and musical numbers.

Reagan Gross, daughter of new Highland Home principal Barry Gross, will play Dorothy, while Clifton Kelly will be the Scarecrow, Ron McGough will be the Tin Man and Jake Strength will play the Cowardly Lion.

Dozens of familiar faces will fill roles from Aunt Em to the Wicked Witch of the West and citizens of Oz, while local children will play munchkins.

Showtimes are Friday and Saturday nights at 7 p.m. in the HHS auditorium, and tickets are $10 in advance and $12 at the door.