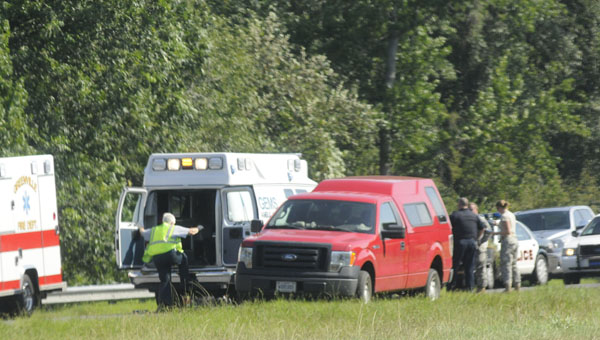 One man is left in serious condition after he flipped his vehicle over the median on I-65 Monday. (Advocate Staff/Patty Vaughan)

A Butler County man is in serious condition after a one-vehicle accident on Interstate 65 Monday.

At approximately 4 p.m., John Morris Robinson, 66, who was traveling in the southbound lane on I-65, drove into the median and flipped his car into the northbound lane.

Robinson is in serious condition, according to Lt. Justin Lovvorn of the Greenville Police Department.

Morris was transported to L.V. Stabler Memorial Hospital where he was later airlifted to Baptist Medical Center South in Montgomery. He is currently in the hospital’s intensive care unit, according to State Trooper Kevin Cook.

However, Cook believed Morris did not have life threatening injuries, because of Morris’ ability to communicate with officers on the scene.

“The trooper I spoke with, who is not a medical examiner, said it was some kind of neck injury that will require surgery,” Cook said. “I know a neurosurgeon was going to get involved.”

Lovvorn said the cause of the accident is still unclear.

“It’s not real clear,” Lovvorn said. “He had some food in the floor board. He may have been eating and dropped something on the floorboard. It was hard to tell for sure, but something distracted him.”