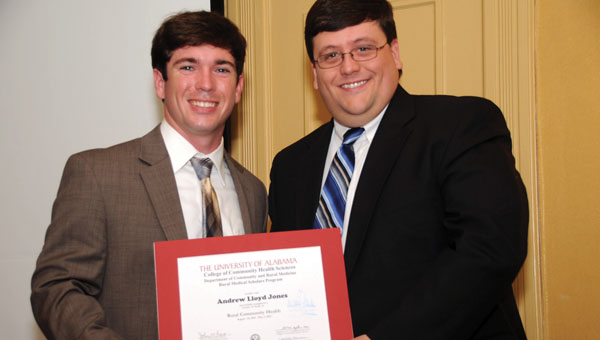 He is currently a senior at the University of Alabama, majoring in biology and has been a member of the Dean’s List every semester as well as being inducted into several honors societies on campus including Alpha Epsilon Delta/AED (pre-med honors society) and Phi Eta Sigma and Alpha Lambda Delta (undergraduate honors societies). He has also earned scholarships for excellence in the biological sciences.

As an undergraduate research assistant in Dr. Carol Duffy’s lab, he worked on the purification and attachment of fusion proteins to iron oxide nanoparticles with the eventual goal of improving cancer diagnostics and drug-delivery mechanisms.

Selection for the Rural Medical Scholars Program is based on a competitive application process open only to students from rural Alabama who wish to become rural physicians. RMSP includes a year of study leading to the master’s degree in Rural Community Health and early admission to the University of Alabama School of Medicine in Birmingham. Approximately 10 students per year are accepted into the 5-year program, in which students can earn a master’s degree, or complete their senior undergraduate year, during the first year of the program at the University of Alabama. RMSP provides training with rural preceptors, agromedicine experiences, and courses related to rural community health during the initial year at UA’s College of Community Health Sciences (CCHS), a branch campus of the UA School of Medicine.

Jones was the valedictorian of Fort Dale Academy’s Class of 2008. At FDA he served as vice-president of the senior class and was a four-year letterman in football, basketball and tennis.

He is the son of Jack and Ellen Jones of Greenville.