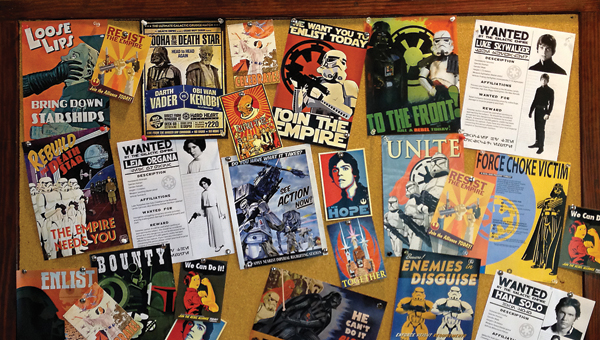 The Greenville Butler County Public Library will host the 35th Anniversary of “Long Ago & Far, Far Away” by celebrating “Star Wars Day” on Saturday, July 28 at 11:30 a.m. (Courtesy Photo)

To celebrate the 35th Anniversary of “Long Ago & Far, Far Away” the Greenville-Butler County Public Library is celebrating “Star Wars Day” on Saturday, July 28 at 11:30 a.m.

“Star Wars remains as popular today as it was when the first movie was released,” said Library Director Kevin Pearcey. “It crosses generations because you had the two sets of movies, the first trilogy, which started in 1977, and the second starting in 1999. The kids who grew up with the original Star Wars became parents and enjoyed it the second time around with their own children.”

And Darth Vader, the Sith Lord himself, will be making an appearance. Members of the Alabama Garrison of the worldwide 501st Legion will be at the library to pose for photographs and meet with fans.

“The 501st is an authentic Star Wars costuming organization with incredibly detailed costumes based on the movies,” said Pearcey. “They volunteer their time to help promote Star Wars. We’re extremely excited they’ll be able to join us.”

Fun things planned for the day include: a Star Wars speed drawing contest, parent-child mask making, and Star Wars Bingo. Also, the library will screen some of the best Star Wars Fan Films. Prizes will be awarded. Patrons can also check out the library’s new Star Wars books for all ages.

“And if you feel like dressing up as your favorite Star Wars character, by all means, dress up!” said Pearcey. “We’re looking forward to a fun-filled day.”

Pictured from left to right are Ben, Steve and Paul Norman who were the winners of Saturday's 14th annual Jaycees'... read more