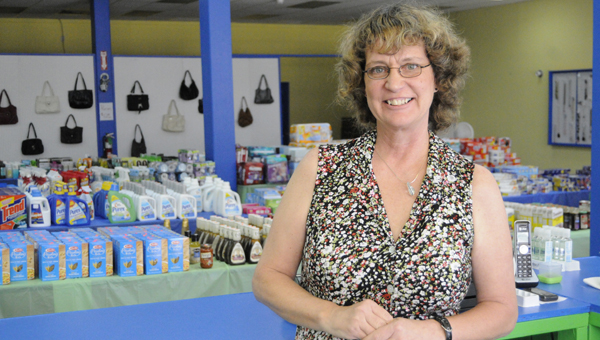 Barb Ausderau has opened a new business in downtown Greenville that stocks everything from paper products to jewelry. (Advocate Staff/Patty Vaughan)

Barb Ausderau is all about helping the community, and with her new business, Essentials Liquidation Warehouse in downtown Greenville, she can do just that.

Essentials Liquidation Warehouse officially opened on July 11 and has a variety of products inside.

“We get stores that are closing or stores that have over runs of things and they sell it to a warehouse,” Ausderau said. “We buy it from the warehouse and resell it at a huge discount.”

Products in the store change on a weekly basis and can be anything from paper products, food, jewelry, purses, make up and more.

Ausderau goes to a warehouse once a week and can ask for a pallet of general merchandise, or 24 “banana boxes.” However, as part of the process, she has no idea what is inside those boxes.

“They might say food, and it’s a surprise when I open every single box,” Ausderau said. “I never know what I’m getting. It’s like Christmas every Tuesday when I open the boxes.”

“Last week a lot of people bought food, so this week I went and bought a lot of food,” Ausderau said. “If I find something that people are going to buy, I’ll sell it.”

The idea behind the store came when Ausderau paid a visit to her family in Indiana.

“My brother has store just like this,” Ausderau said. “People are waiting outside of the door before they open in the morning. They get about 2,200 people a day. With this economy, everybody needs this.”

After living in Greenville for 13 years and having two sons attend Fort Dale Academy, Ausderau thought it appropriate to locate her business in downtown Greenville.

“I’m trying to learn what people want me to offer,” Ausderau said. “I don’t know if there is something else that (the community) wants me to carry. If I can get it, I’ll carry it. I just need some input.”

First Presbyterian Church in Greenville is getting a facelift that will create a ripple effect through the 165-year-old church, according... read more