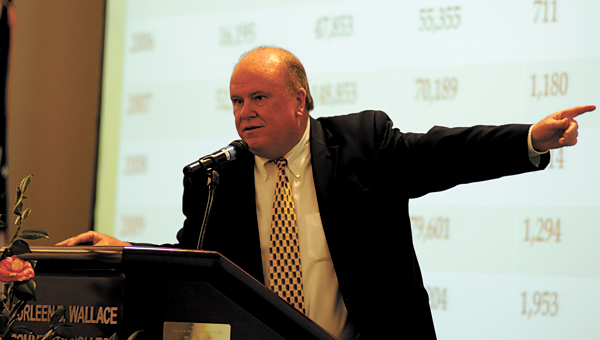 Come August, the City of Greenville will be saving a few dollars.

That’s because there is only one race on the ballot for the upcoming municipal election.

The only race featuring opposition is in District 1, where Keith Gibson, Jerry Myers and Bryan Reynolds are vying for the seat vacated by Dr. Jean Thompson.

The deadline to qualify for the election was July 17.

City Clerk Sue Arnold, who serves as the election manager, estimates the August election, and potential runoff election, will cost the city $5,000. Had all six races been contested, she said the cost of the election would likely have been closer to $25,000.

According to Arnold, had the races been contested, the city would have had to print ballots, hire poll workers, pay for postage for absentee ballots, issue voter registration cards due to redistricting and rent electronic voting machines for all five districts. Instead, the city will pay those cost for just District 1, and at the next Greenville City Council meeting, the council will be asked to adopt a resolution declaring the unopposed candidates as the winners in their respective races.

“It isn’t unusual for us to have just one race during a municipal election,” Arnold said. “When we have unopposed candidates, the mayor immediately files a written statement with the city council following the qualifying deadline that declares the candidates as unopposed. At the next council meeting the city council will adopt a resolution declaring that candidate as duly elected and will issue a certificate of election to the newly elected officials.”

McLendon said he was humbled to be given the opportunity to serve another four years.

Sims said he believes the city will benefit from the council staying largely intact.

“I’m excited to be able to serve another four years and help our city continue to move in a positive direction,” said Sims, who will be serving his third full term on the council. “We’ll continue to work toward bringing in new industries and jobs and making Greenville an even better place for people to live. I think the continuity we will have with the council will be a big benefit to the city.”