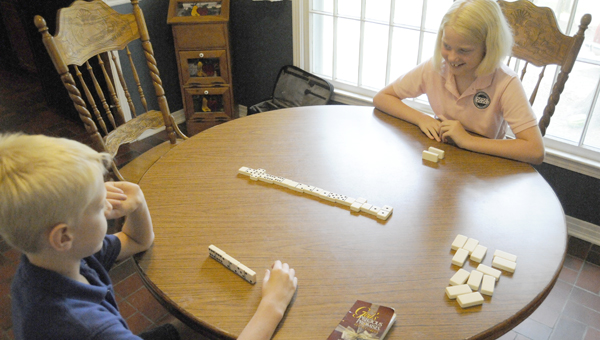 What started as a summer night pastime with family around the table, quickly transformed into a world-championship-winning team.

Georgiana’s Virginia and Charleston Coker are 9-year-old twins that competed and won the children’s doubles division in the 37th World Championship Domino Tournament in Andalusia.

The competition began July 13 with the singles and moved to doubles on July 14.

“The winner of each match is based on the best two-out-of-three games, but Virginia and Charleston never had to play the third game as they won their first two games against each opposing team,” said Jennifer Coker, the twins’ mother.

Winning in dominoes on such a large scale is not an uncommon occurrence in the family. Jennifer said dominoes has always been a way of life even from her childhood.

“Playing dominoes has been part of my life ever since I can remember,” she said. “In fact, some of my earliest memories are of me playing dominoes with my grandmother and great-uncle at our house in the Industry community.”

Family gatherings exploded with dominoes flooding the tables, which inevitably landed Jennifer’s brother, T.J. Jernigan, in the top seat at the World Championship for several years in singles and doubles.

“While we were dating, my husband learned to play dominoes and we do still play from time to time, but my Daddy, or ‘Pop’ as my children call him, has really been the one who has taken up the most time teaching Virginia and Charleston to play dominoes,” Jennifer said. “I entered them in the tournament when they were 7 years old, because I wanted them to get some experience playing in the tournament.”

The twins began learning to play the game when they were 2 years old using Sesame Street dominoes. From there it went from being a game to a passion.

“Our Pop used to tell jokes in the game, and we like it a lot so we never really got bored because it’s very fun,” Charleston said.

Even with a world championship to her credit, Virginia said one of her favorite memories of playing dominoes is still sitting around the table playing with her family.

“One time we were playing singles with Pop, and I beat them,” Virginia said. “I was like, ‘Oh my goodness,’ because I never beat Pop.”

They plan to compete in the children’s division for the next three years before moving to the teen division.

Eventually, they would like to win the adult world championship.

“We are so thankful that God has blessed us with two children who enjoy the game of dominoes,” Jennifer said. “I hope they continue to play dominoes for years to come, and I hope that one day they will pass their enjoyment of the game on to their children as well.”