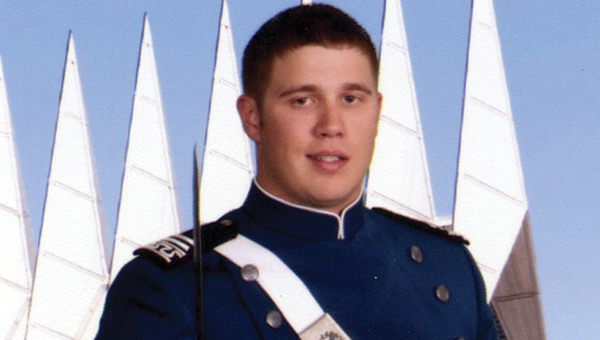 Kyle Tanner graduated from the United State Air Force Academy in May. Tanner, a Greenville native, will now be stationed at Vandenberg Air Force Base in California where he will train as a missile operator before moving on to Minot Air Force Base in North Dakota. (Courtesy Photo)

When Floyd Atkins thinks about Kyle Tanner, he can’t help but smile.

The former Greenville Academy wrestling coach pictures a “stout” sixth grader grappling with older, more experienced wrestlers who more often than not overpowered the Tornado wrestler. More than a decade later, Atkins can still picture the determination on Tanner’s face as he labored to overcome his lack of experience in the sport.

“Because of his weight Kyle was almost always wrestling older, more experienced boys,” Atkins said. “As a sixth grader he wrestled quite a few seniors. Because of that he didn’t win a lot of matches, but he never complained or made excuses. He would just show up the next day ready to get back to work to try and improve. Even in the sixth grade he had a tremendous work ethic. He was the kind of kid that when he set his mind to something, he was going to find a way to get it done.”

That’s why Atkins wasn’t the least bit surprised when Tanner graduated from the United States Air Force Academy in May.

Tanner transferred to Greenville High School after Greenville Academy closed its doors before the start of his freshman year. It was at GHS that Tanner set his sights on the Air Force Academy.

“I started to think I wanted to be in the military when I was about 11 years old,” Tanner said. “I learned about the Air Force Academy when I was a freshman, and at that point I made it my goal to graduate from the Academy.”

He made that goal a reality, but it wasn’t easy.

“It was a difficult, but rewarding experience,” he said.

“As I had been told when I got there, the Air Force Academy is a great place to be from, but it’s not always such a great place to be while you are there,” Tanner added with a laugh. “It’s very challenging academically and athletically, and there’s a lot of stress mentally, but I’m very glad that I went that rout.”

Tanner, an Eagle Scout, said his time at Greenville Academy and Greenville High School prepared him well for the challenges he would face at the Air Force Academy.

“The teachers at both GA and GHS did a great job in helping prepare me for the academic challenges the Academy provided,” he said. “Also by being involved in the JROTC, I was somewhat accustomed to the military and military mannerisms.”

Tanner, who was the salutatorian of Greenville’s class of 2007 and the battalion commander of the school’s JROTC program, graduated from the Air Force Academy with a bachelor’s degree in humanities with a focus on philosophy. He also finished with minors in philosophy and Portuguese.

Along with receiving his degree, Tanner was also commissioned as a second lieutenant. He will now be stationed at Vandenberg Air Force Base in California where he will train as a missile operator before moving on to Minot Air Force Base in North Dakota.

“I’ll basically be sitting on a nuclear missile,” he said with a laugh. “The Air Force definitely has a sense of humor. That’s not the job I wanted at all. When we were getting ready to graduate, they gave us a sheet of paper and told us to choose our top six preferences for jobs. I didn’t list this at all, but it’s what I got, and I’m excited to begin my career.”

Tanner said he is also honored to have the opportunity to serve his country.

“I took an oath to support and defend the constitution from all enemies, foreign or domestic,” he said. “I take that oath very seriously. I took it seriously before I took the oath. I think it has to be that way. I don’t believe you can adjust your values to meet an oath you have taken. Our country, our nation and our freedoms are very important to me. I feel honored to be able to serve this country.”