YMCA director set to step down 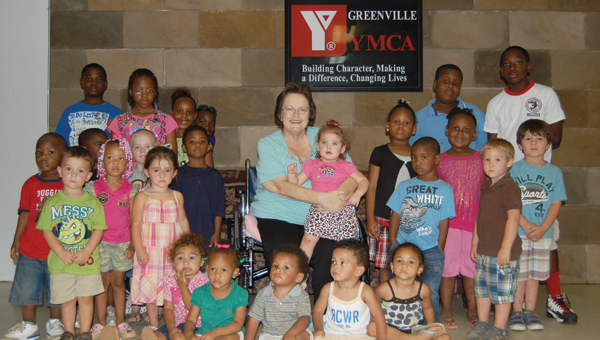 Amanda Phillips, center, will retire from her role as executive director of the Greenville YMCA on Friday. (Advocate Staff/Patty Vaughan)

Amanda Phillips’ heart belongs to the YMCA, and that is where her heart will remain even after she retires as executive director on June 29.

Phillips first stepped foot into the YMCA on Feb. 6, 1996, as a front desk secretary and by 2003 had worked her way up to executive director.

She has held that position ever since  and has now been working for the YMCA for 16 years.

“It’s been absolutely amazing,” Phillips said. “After I came to the Y, I realized that being around the children and all of the families was what I really wanted to do.”

During her tenure at the YMCA, Phillips has seen the numbers grow in every direction and has seen the athletic program flourish.

“When we were at the other building, we only had one room for childcare,” Phillips said. “Over here, we have five. All of our programs have grown tremendously.”

One of the biggest joys Phillips has received from the Y is watching “her boys” play football on Saturday nights.

“I love football,” Phillips said. “I generally travel with my boys every Saturday night, and I’m going to really miss that. I had told the coaches and the players that I would be there some Saturday nights to watch them. I’ll make sure of that. I’m not going to leave them completely.”

Diane Blackburn, the office manager at the Greenville YMCA, has been working with Phillips since the beginning and said she will be greatly missed.

“The biggest thing about Amanda is that the Y is her heart,” Blackburn said. “While I have been here, I have seen her do miracles with some of these kids. I’ve never seen anyone deal with children better (than she does).”

Some of Phillips’ closest coworkers and friends said she has influenced an entire generation of teachers, children and parents through her time at the Y.

“Miss Amanda is a very nice and sweet person,” said Katina Bullock, a pre-school teacher at the YMCA. “My own very special moment with her was when she nominated me to be the employee of the month. I’m going to miss her so much.”

Lessons Phillips will take with her are patience, understanding and that children will always be children.

Phillips plans to continue to visit the Y as much as she can and hopes that she can leave it in good hands.

“I’m sure I’ll aggravate the stew out of them,” Phillips said. “I have to check on it because I’ve always said this is my YMCA. I love everybody here so if I’m not on the phone up here, I’m going to be visiting.”

A replacement for Phillips has not yet been hired. Management in Montgomery is expected to oversee the Greenville operation until a replacement is found.