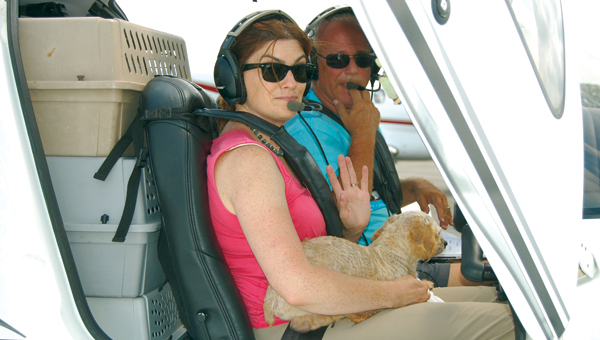 The Butler County Humane Society’s efforts to give several pets a new home are off to a flying start, thanks in no small part to Pilots N Paws.

Pilots N Paws is a nonprofit organization that specializes in organizing the transport of animals in need of safe homes between pilots of small planes and rescue volunteers.

The organization began almost as sheer coincidence as pilot and founder Jon Wehrenberg agreed to help co-founder Debi Boies transport a rescued Doberman from Florida to South Carolina via plane.

Roughly four years, 2,465 pilots and 8,280 volunteers later, their dream of rescuing stray animals has been realized on a much larger scale.

Areas like Greenville in particular are ideal locations because the local animal shelter won’t receive as much foot traffic as a more populated city, where the animals have a much better chance of being adopted.

Kandys Killough, vice president of the Butler County Humane Society, expressed her gratitude towards the pilots for the work they’ve done.

“They use their own time, planes and gas to go all over the country, and they love animals,” Killough said. “They’re wonderful people.”

Veteran pilot Ed Golly flew into Mac Crenshaw Memorial Airport Thursday morning for a pickup and, despite the fact that he has flown planes for more than 40 years, admits that Pilots N Paws was never something he wanted to get into for profit, but only because he loves to fly.

“There were guys like Galileo that knew flying would work one day but never could actually do it,” he said.

Friday proved to be the more celebratory occasion as experienced pilot Jeff Bennett arrived to transport his 1,000th animal with Pets N Paws.

Bennett documents every animal he transfers on his plane in his logbook, and he also takes a picture with each animal, big or small. The achievement of transporting 1,000 animals is made all the more remarkable when considering that he is only able to fly a little over a dozen animals comfortably per trip.

“Luckily, they were all puppies.”