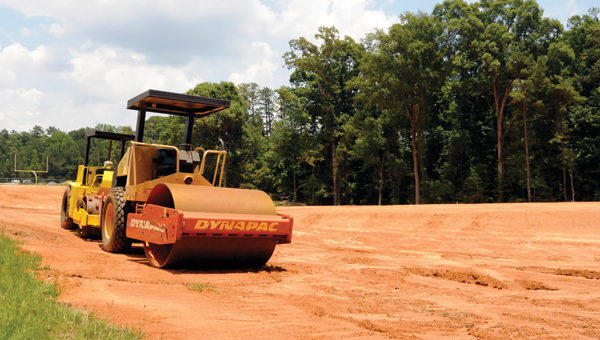 Construction of Greenville’s six new municipal tennis courts, which were slated to open this summer, is behind schedule due to heavy rains in the Greenville area. (Advocate/Andy Brown)

If the construction of the City of Greenville’s new tennis courts was being scored, the count would be weather, 40- contractors, love.

That’s because heavy rains in the Greenville area during the past several weeks have slowed the work on the City’s new municipal tennis courts to a near standstill.

According to Eddie Anderson, building official for the City of Greenville, the progress on the tennis courts has been minimal due to the weather.

When the Greenville City Council announced the project in February, Mayor Dexter McLendon estimated that the approximately $362,000 project would be completed this summer. Anderson said the city no longer has a timetable for the project’s completion.

“The weather has got them held up so badly that they’re behind,” Anderson said. “We don’t have a projected time (for the completion of the project) now because they’re so far behind and having to wait so long. It has to be dry so that they can work. It seems every time it gets dried out, it rains.”

Ground officially broke on the construction project in March of this year.

“They’re still adding dirt to get the elevations correct,” Anderson said. “I would say that (the courts) are at least a couple of weeks behind.”

After the dirt work is complete, the next step will be constructing the actual surface of the courts as well as beginning wiring the courts for lights.

The six new municipal tennis courts, which will be located adjacent to the YMCA, are being constructed with the help of a $9.2 million bond issue that was approved by the city in September 2011.

The only existing public tennis courts in the city are located at Beeland Park, and according to McLendon have fallen into disrepair.

“We haven’t done anything to our tennis courts since the early 1980s,” he said in a previous interview with the Advocate. “They are in terrible shape, and it was just time that we did something about it.”

While the new courts will be located on the YMCA campus, they will not be subject to YMCA fees.