130 take part in screening at BCHD 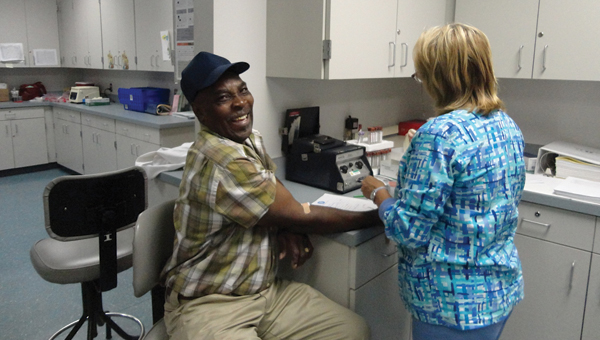 More than 130 men came out to the Butler County Health Department on June 9 to take advantage of free prostate screenings.

“Most men realized the importance of the screening and were pleased to be receiving it at no cost,” BCHD Social Worker/Care Coordinator Nikki Lovvorn said. “We had several who had friends and family who had received a prostate cancer diagnosis and were quick to tell others about the importance of screenings. I was very proud of all of the men who participated.”

The exams that each individual received were the Digital Rectal Exam and Prostate Specific Antigen Test or the DRE and PSA.

“According to (Center for Disease Control and Prevention) data, prostate cancer is the most common form of cancer in men,” Lovvorn said. “According to statistics, one in six men will be diagnosed with cancer of the prostate in their lifetime. Finding it early could save a life.”

Birmingham-based Urology Centers of Alabama came down to conduct the screenings.

“Of the 131 men screened Saturday many stated they had never been screened before, but realized the importance of early detection and the fact that there are no noticeable symptoms of prostate cancer while it is still in the early stages,” according to a press release from Urology Centers of Alabama. “That is why they decided this year to get tested. Many of the men reported that they had a family history of prostate cancer which is a high risk factor for prostate cancer.”

According to the release, men should start being tested at the age of 40 for prostate cancer, and the test takes a total of about 10 minutes.

“The prospect of having to have such a thorough exam can be intimidating, but (the men) stepped up and set a good example for their sons, grandsons, family and friends,” Lovvorn said.