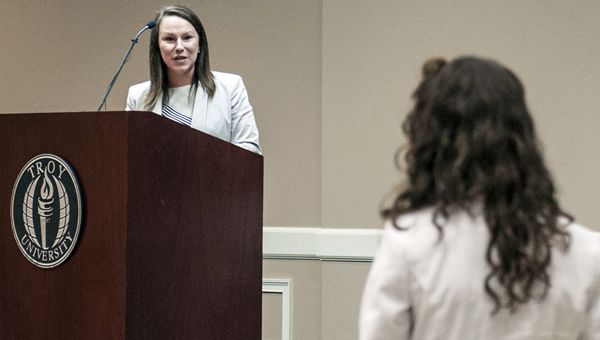 TROY – The importance of public service and self-sacrifice was the focus of a speech presented to delegates of Girls State by U.S. Rep. Martha Roby of Alabama (R-2nd) at Troy University Wednesday.

“I cannot stress to you enough the significance of public service,” she said, “and to be open to the call and ready to serve others for whatever it takes.”

Roby cautioned the delegates not to let materialism cloud a clear vision for achieving success.

“Keep your eyes wide open, because you never know when the opportunity to serve may come,” she said.

Roby was elected in 2003 to the Montgomery City Council, defeating five opponents in her district. In 2010, she was elected the U.S. House of Representative and plans to seek re-election this year.

She concluded the speech by challenging the delegates to share their gifts and talents with the world.

“Whatever the challenge, push through it,” she said. “That’s real sacrifice.”