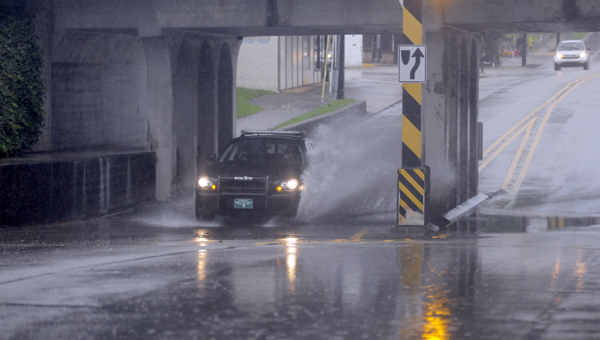 A Greenville Police Departmant cruiser splashes though a puddle under the overpass on Commerce Street Monday morning. Since Friday, Butler County has received a total of 5.72 inches of rain. (Advocate Staff/Andy Brown)

For several days, Butler County was soaked to the core with heavy rains, but despite the cloudy skies and open umbrellas, weather officials are optimistic at what this rain might bring.

Drought has affected the state of Alabama for several years and Butler County is no exception. According to John Christy, state climatologist from the University of Alabama at Hunstville, Butler County has been placed in the D1 and D2 category of drought.

“Butler County has mainly been in the D1 and D2 classifications, which are moderate and severe droughts,” Christy said.

Since Friday, Butler County has seen a total of 5.72 inches of rain, but according to meteorologist John Purdy from NOAA’s National Weather Service, Butler County is nearing the end of the heavy downpours.

“Wednesday will be the same thing, but there will be scattered showers and thunderstorms for the rest of the week,” Purdy said. “Even though the pattern where they called for heavy rain was a little bit abnormal, we’re switching back into the normal summer pattern, which is scattered thunderstorms during the afternoon hours.”

For the past 60 days, Butler County has been close to meeting the proper amount of rainfall, but it still has a long way to go.

“This will make a dent that’s for sure,” Christy said. “It’s south of Montgomery and particularly the southern tier of counties that we should see some improvement, but when you go back six months, Butler County is still under normal rain fall.”

Because a cold front will be moving in from the north, Wednesday will be relatively wet with a mix of light rain and heavy downpours.

Purdy predicts that Butler County could see one to two more inches fall in the area but doesn’t expect any severe weather.

“For flash flood warning, what we’re looking for the amount of rainfall that will occur over a one-hour period or three-hour period. If we see our rain fall estimates are exceeding two inches in a one hour period, we look a the radar, we estimate the precipitation and make the call.”