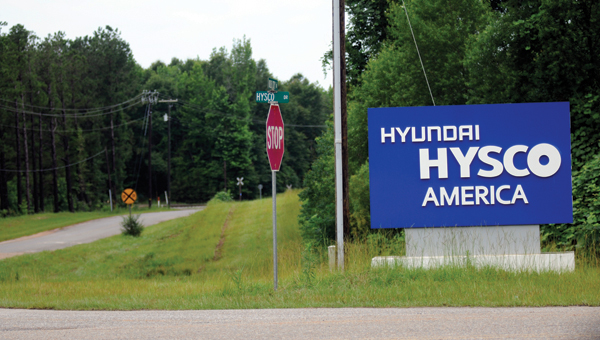 The City of Greenville will widen and pave County Road 22 from the intersection of Hwy. 185 South to the railroad tracks that cross County Road 22 just past the entrance to Hysco America Company. (Advocate Staff/Andy Brown)

Officials with the City of Greenville announced on Monday that a grant from the Alabama Industrial Access Road and Bridge Corporation will fund a project to widen and pave County Road 22.

The project will begin at the intersection of Hwy. 185 South and extend to the railroad tracks that cross County Road 22 just past the entrance to Hysco America Company.

Mayor Dexter McLendon said the project has been seven years in the making.

“We’ve been working on this for a while, and I’m excited that we’re going to finally get it done,” he said.

“It’s something that has needed to be done for a long time, and I apologize to the folks that live out there on that road because it really is in terrible shape, but by waiting until we could get the grant we’ve saved nearly three quarters of a million dollars.”

The City was able to secure the $753,300 grant due in part to the creation of 40 new jobs that accompanied a $22 million expansion by Hysco America Company, which is located just off of County Road 22.

The City has contracted with APAC Mid-South, Inc. for the project, which will cost $717,462.35. The City will have to return the portion of the grant that is not used for the project.

It will also be responsible for paying Goodwyn, Mills and Cawood’s engineering fees, which McLendon estimates will cost approximately $70,000.

“That’s a pretty small price to pay to get a project like this done,” McLendon said. “We basically get a new road, and we get to fix a road that needs fixing, and it’s going to cost us less than $100,000.”

McLendon said he expects work to begin on the project, which will also include resurfacing of the access road into Hysco’s facility, in mid July and for the work to be completed by September.