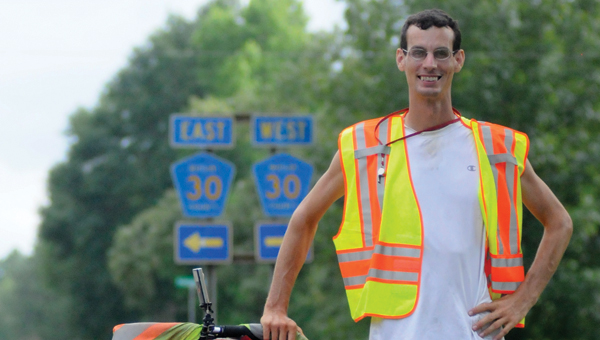 George Throop passed through Butler County this week while walking across America to raise awareness about making healthy lifestyle choices. Throop, who plans to end his walk in Washington D.C., began his trek in Washington state on Sept. 20, 2009. (Advocate Staff/Andy Brown)

And George Throop’s actions practically shout at you.

The 36-year-old from Vancouver, Wash., is passing through the Butler County area this week as part of his mission to inspire others to take up a healthy lifestyle by walking across the country.

“The broader message is that cancer prevention comes with healthier lifestyles,” Throop said. “The simple message is just to ask people to get out and take a walk themselves. A walk is not only good for your health, it’s good for your mind and soul.”

While Throop said he is unsure if his mother’s lifestyle choices played a role in her death from cancer, he knows that many today make choices that put them at a greater risk of cancer, heart disease and diabetes.

“Sadly, I’ll never know the answer to (whether or not my mother’s lifestyle played a role in her death),” he said. “That said, I need to make the following point clear. I’m not taking these steps across thousands of miles of America in a futile attempt to bring her back. The goal is to inspire changes that will prevent other families from suffering similarly. I don’t want them to have to go through what we went through.”

Throop, who began his journey on Sept. 20, 2009, has walked nearly 3,700 miles, passing through Washington, Oregon, California, Arizona, New Mexico, Texas, Louisiana, Mississippi, Florida and of course parts of Alabama. He plans to end his walk at the White House in Washington, D.C.

Throop said the distance of his walks can vary depending upon his destination.

Once the Washington native reaches a city or town, he seeks shelter from those he meets along the way.

“I just recently started walking into police stations and asking for them to help me find shelter when I haven’t had an offer from someone who knows someone that I have met along the way,” he said. “I am usually so fortunate to be invited indoors by nice people. Sometimes I am given more offers of shelter than I can accept. Other times I am given no such offers, and have to find a place to camp. Usually, the more populated an area, the greater my chances of being offered shelter.”

On Wednesday night, Throop spent the night on the stage of the Hank Williams Sr. Music Park before setting out for the Camellia City.

Throop, who is already on his eighth pair of shoes since beginning his trek, said the “greatest part of the walk” has been the people he’s met along the way.

“I haven’t had a single bad experience with people,” he said.

“So many people of all ages, races and political persuasions have been so wonderful to me. I’ve had people host me for a night, give me food, stop and make sure I had enough water. It’s been wonderful meeting all of these very kind people who have become a part of my journey.”

Throop is documenting his journey on his website, enjoythewalk.org, where he blogs about his travels.