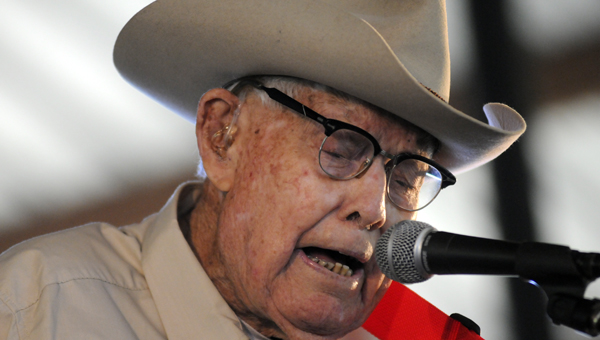 It was 1938. Schuffert, a delivery truck driver for Hormel Meats Company, made a stop at Lilly Williams’ boarding house in Montgomery. After he unloaded the meat, he spotted a “boy-sized” guitar in the corner of the room and decided to pick a few songs before continuing his route.

“I heard Miss Williams holler, ‘Hiram, he’s got you beat,’” Schuffert said with a smile. “And I did. I already had my own band, and I was playing on WSFA from 6 to 6:30 every morning just me and my guitar.”

Schuffert finished his song, put the guitar back where he found it and started out the door. That’s when he heard the voice that would become one of the most famous voices in all of country music.

“School was out, and Hank was in the back room there listening,” Schuffert said. “As I was walking out I heard this voice that was just as strong and clear. It was a man’s voice in a boy’s body. Hank was only 15 at the time, but he could sure sing. Even then I knew he had a one-of-a-kind voice.”

Schuffert, who jokes that he discovered the country music legend, invited Williams to ride along on his route the next day.

“I told him we’d sing all day,” Schuffert said. “That’s all he needed to hear. He was for anything to do with music.”

Schuffert, now 96 years old and still playing his old Martin guitar, may not get the credit for discovering Williams, but he was certainly instrumental in helping Williams get his start in the music business.

It was on Schuffert’s radio show on WSFA that central Alabama was introduced to Williams’ haunting voice.

Schuffert, who co-wrote “Rockin’ Chair Daddy” with Williams, also helped the future country music star form his first band, and played guitar with Williams during his first appearance at Georgiana High School and later at his first performance in an auditorium, The Ritz Theatre in Greenville.

“That show at the Ritz was the first show Hank ever booked,” Schuffert said. “After that we played in pretty much every theatre in Alabama and Florida. I’d like to say I helped him out, but I didn’t give him that voice and I didn’t teach him to write those songs. That’s something you get from God.”

Schuffert, who performed at the 33rd annual Hank Williams Festival in Georgiana on Saturday, was there at the beginning and he was there at end, serving as a pallbearer at Williams’ funeral in 1953. Williams, at just 29 years old, had passed away while traveling to a show in Canton, Ohio. He had asked Schuffert to drive him there, but a previous commitment had forced Schuffert to skip the trip.

“Hank loved the Lord, and I loved Hank,” Schuffert said. “He made country music what it was. This alley-cat music they play these days ain’t country music. Country music is simple. It reaches out and touches your heart, touches your soul. Hank was able to touch people better than anyone I’ve ever seen.”