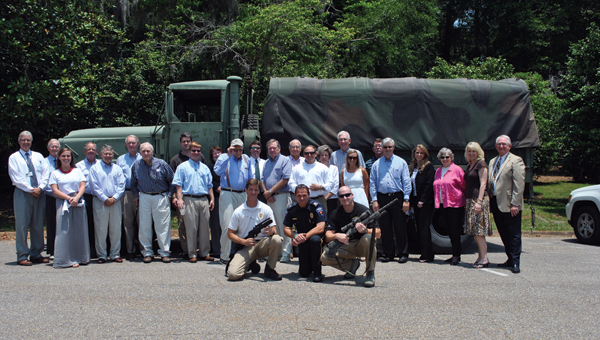 The Greenville Police Department has received a 911 call from a local hotel alerting authorities that a man is walking up and down the halls brandishing a gun. Officers respond to the scene and a shootout ensues.

Two officers are wounded during the gun battle. A group of highly trained officers is then dispatched to confront the subject. The officers move through the front of the hotel and make their way to the suspect’s room. The door is cracked and the light is off. The officers quickly breach the door and secure the scene.

This was no training exercise.

It was the first major engagement by the Greenville Police Department’s Special Response Team (SRT).

The team was formed in the summer of 2005, and responded to the shootout at the Comfort Inn in January of 2006.

“Before (we had Special Response Team) we would secure the perimeter and wait for the state’s team to come assist with the situation,” Capt. Randy Courtney, SRT commander, said. “Those guys are scattered all over the state and it could take up to six hours for them to get to the scene.”

Courtney saw that as a problem.

While Courtney found it difficult to get approval for a Special Weapons and Tactics team (SWAT), he did manage to convince officials with the GPD that there was a need for a high-risk drug warrant unit.

“Before we would just round up whoever was available to go and serve these warrants,” Courtney said. “No one had special training in how to handle these situations. We’re lucky no one was injured. So, I sold them on the idea of having a group of guys trained to serve these warrants.”

From there, the unit evolved and now participates in regular training that involves everything from rappelling sessions to hostage rescue situations.

“We’re a lot better equipped today than when we started,” Courtney said.

When the team breached the Comfort Inn in 2006, it didn’t even have flashbang grenades or shields.

“Because of our training we have handled a number of situations here with a great outcome,” Lt. Justin Lovvorn, SRT team leader, said. “We’ve put a lot of work in to get where we are.”

All 10 members of the unit are state certified, including Greenville Firefighter Jason Pouncey, who is also a trained paramedic.

“For a city the size of Greenville to have a team like this is something for our department and our city to be proud of,” Lovvorn said.