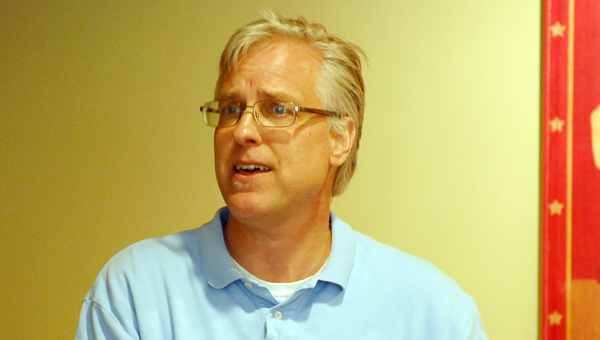 Norrell announced to the Camellia City Civitan club on Monday that Dr. Brandon Slagley, Dr. Vijay Tirumalasetty, Dr. Paul Harrison and Dr. Kristine Ortega will be moving to the Camellia City in the next month or so. All four physicians will be doing family practice with Ortega also practicing geriatric medicine.

Medicine has been an ever-changing business, and with the changes comes a need to educate the community on the new techniques used in practicing medicine, Norrell said.

It was 20 years ago that Dr. Danny Hood, Dr. Norman McGowin and Dr. Aubrey Stabler set up shop in Greenville with the intention of having a large practice, many patients and the idea of staying in the community, Norrell said.

However, the times have changed and the hospital and the clinic are full of new faces, and with new faces, comes new ways of practicing medicine.

“The hardest thing is learning how to educate today’s patient base that yesterday’s medicine has changed a little bit and gaining the trust from the physicians,” Norrell said.

“If it’s somebody that is not American-born, American-trained that we’re going to put the trust in, we’ll have to trust that they’re board certified, educated in what they’re doing and that they understand all of these core measures.”

With “old school doctors” retiring from practices, Norrell said Greenville was in a scary situation.

“It just kept looking like we weren’t making any progress,” Norrell said.

With the help of Community Health Systems, or CHS, the corporation that owns the hospital, the hospital grew into an understanding that new physicians became vital.

“(CHS) understands how important the physicians are to the hospital because if you don’t have physicians that are handling the primary care base, they’re not going to be putting people in your hospital,” Norrell said. “If you’re not putting any people in your hospital, than you’re not going to have any need for the specialties and the subspecialties.”

According to Norrell, change in medicine is inevitable and has been happening in Butler County during the past 10 or so years. However, Norrell said the local hospital is run by the local people and patients need to begin adapting to the ongoing changes.

“I don’t think we’ve seen the change anywhere near like what we’re going to see in the next five years,” Norrell said. “I don’t say that to be discouraging, but I say that because today, more than ever, it’s so important that we have our hospital.”

With new physicians and a new CEO set to be hired, Norrell said he hopes to see the hospital return to its glory days of the late 1970s and early 1980s when people from all around the area traveled to Greenville to use the hospital.

“I believe we can get there,” he said.