‘Veterans should be thanked 365 days’ 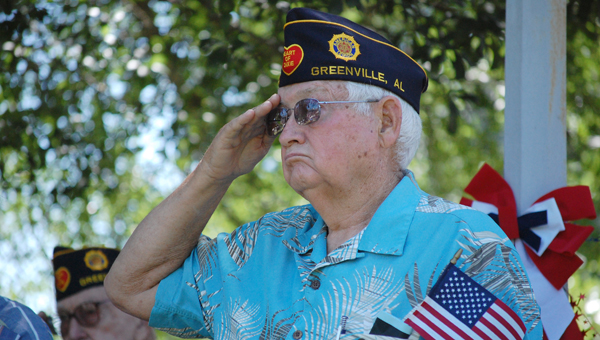 “Let every nation know, whether it wishes us well or ill, that we shall pay any price, bear any burden, meet any hardship, support any friend, oppose any foe, to assure the survival and the success of liberty.”

These were the words of John F. Kennedy that Marine Chris Stinson concluded his speech with at the 8th annual Lions Club Memorial Day Celebration on Monday.

“With Memorial Day, come such words as veterans, patriots, freedom, liberty and patriotism, which in many ways are all tied together” Stinson said. “Some of you were raised on these words. Some of you have fought and given great sacrifices for these words. Memorial Day is not only a day to remember the fallen soldiers and heroes who have given the ultimate sacrifice, but also to embrace the things that we have today.”

“I thought it went really well,” Langford said. “I think that the veterans really appreciate that we put this on and that the community comes out and honors them.”

Local veterans and leaders in the community spoke to the importance of recognizing veterans to a crowd full of World War II veterans, Vietnam veterans, Cold War Veterans and veterans of the wars in Iraq and Afghanistan, and many more in attendance.

The ceremony concluded with veterans making a walk around Confederate Park surrounded by an applauding crowd.

“I often think how blessed I am and how lucky I am to live in a country like America,” Greenville City Councilman Jeddo Bell said.  “A country where we enjoy freedoms that many countries cannot enjoy. I am so impressed with our armed forces who for many, many years have fought on foreign soils so that we might be safe here in these United States of America.”

Stinson wanted to express to the crowd the importance of Memorial Day, and talk about how it is a day for remembrance but also celebration.

“Patriotism is defined by actions not just words, and freedom is what I like to call the big picture. A veteran should be thanked 365 days – not just Memorial Day,” he said.