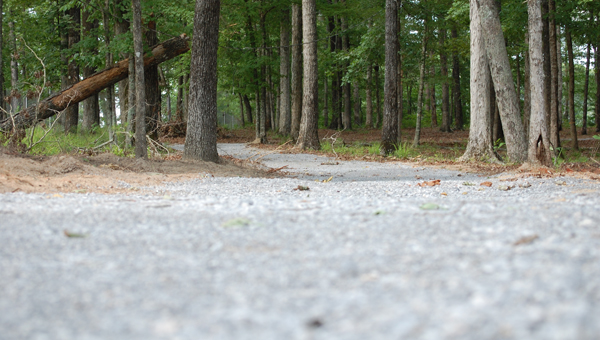 A grant from Strategic Alliance for Health helped fund the construction of a walking trail on Watermelon Hill. The trail is covered in finely crushed stone called “crusher run.” Advocate Staff/Patty Vaughan

Thanks to a grant from Strategic Alliance for Health, runners and walkers will have a new place to exercise in the Camellia City.

Five grants, funded by the Alabama Department of Health, were distributed throughout Butler County. One of those projects was the construction of a walking trail on Watermelon Hill, located on the property of the Greenville YMCA.

“We actually did it in about three and half days,” Southern Sand & Gravel owner Wayne Butts said. “It’s what you call ¾ crusher run.”

The break down of the crusher run is a crush limestone mixed with dust which is about ¾-inch rock, Butts said.

The total cost of the project was $10,650 but because of the grant, the YMCA Public Parks and Recreation Board of the City of Greenville only had to provide a 30 percent match with 70 percent covered by the grant.

“Moisture makes it compact, and under that, we laid a fabric,” Butts said. “It’s just a cheaper way to go without using concrete and asphalt. We didn’t put (the rock) on the top. We set it in the ground. We under cut four inches so the water will drain over it.”