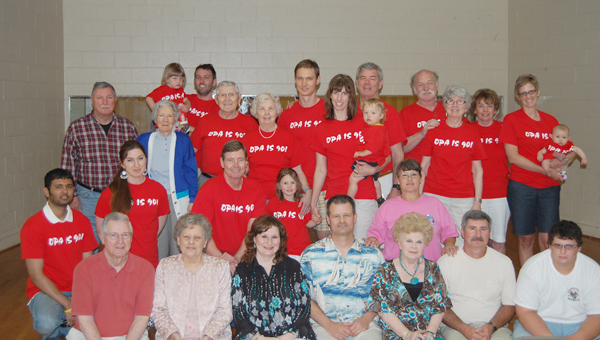 J.D. Sexton, surrounded by family and friends, celebrated his 90th birthday at Beeland Park on Monday. Those that attended included members of the Sexton, Lominska, Davis, Grayson and Rice families. Advocate Staff/Patty Vaughan

It’s a decision that would carry the Honoraville native all the way to Europe and into the middle of one the fiercest battles of World War II.

Sexton began serving the U.S. as a lumberjack with the Civilian Conservation Corps. After a year cutting trees in Washington, he made his way back to Alabama.

Sexton, still a member of the Civilian Conservation Corps, transferred to the camp nearest to his hometown of Honoraville.

“I had my choice to transfer to the nearest place to my home and that was Greenville,” Sexton said.

Shortly thereafter, he enlisted in the U.S. Army and was sent to fight in the European Theatre.

Sexton was a member of the 132nd Ordnance Company, and worked as a welder fixing pipes that would typically break in the bitter cold of Europe’s winter months.

“We were the closest ordnance company to the front lines,” he said.

During his time in the service, Sexton fought in many battles including the Battle of the Bulge.

The Battle of the Bulge was the largest battle fought by the Americans in World War II.

“We were caught up in Belgium and the Germans broke through,” he said. “There were 10 to 20 inches of snow and the infantry guys that were walking during the summer months thought it was so hot that they got rid of their equipment like the big duffle bags and when winter hit, they did not have their change of clothing. They did not have coats and when they were caught in battle, they were at the mercy of the Lord.”

Many of the soldiers froze to death through the battle because they did not have the proper equipment. Approximately 600,000 American troops were involved in the battle and more than 81,000 were lost. The Germans lost 100,000 soldiers in the battle.

“I’ve seen them been hauled out by truckloads,” Sexton said.

Sexton served for a total of 28 years in the army with three active and 25 in the reserve.

“I consider myself very fortunate to be able to serve my country but not in the front line,” he said.

On Monday, Sexton, surrounded by friends and family, celebrated his 90th birthday at Greenville’s Beeland Park.