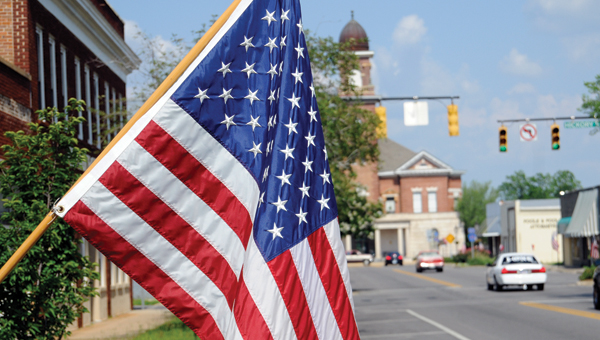 As the clock ticks its way toward 6 a.m. and the sun makes its appearance, most folks are just now reaching for that first cup of coffee if they’ve even begun to stir about.

Meanwhile, Jimmy Russell is reaching into the back of his Jeep for an American flag.

It’s the first of many flags he’ll place during the next hour, and he’s not alone.

Russell is just one of several members of the Camellia City Civitan Club that makes sure Old Glory lines the streets of Greenville during national holidays.

“It’s not the City (of Greenville) that’s getting up early to put the flags out,” Russell joked.

The Civitans began putting the flags out more than three decades ago as a fundraiser. It’s been so successful that other clubs, such as Andalusia and Grove Hill, began a similar fundraiser.

“We started it, but it was such a good fundraiser that other (Civitan Clubs) started doing it too,” Russell said.

But it’s more than just a fundraiser.

On 10 national holidays — including Armed Forces Day, which was celebrated Saturday and Memorial Day, which will be celebrated Monday — the Civitans place approximately 150 flags in front of businesses, churches and even a few homes.

But it’s even more than that.

It’s about making a difference.

From the very beginning in 1917, Civitan encouraged its clubs to seek out and fulfill needs within their communities. The Camellia City Civitan Club, which just recently celebrated its 57th anniversary, saw a way to combine patriotism and service.