Simmons family takes to the sky 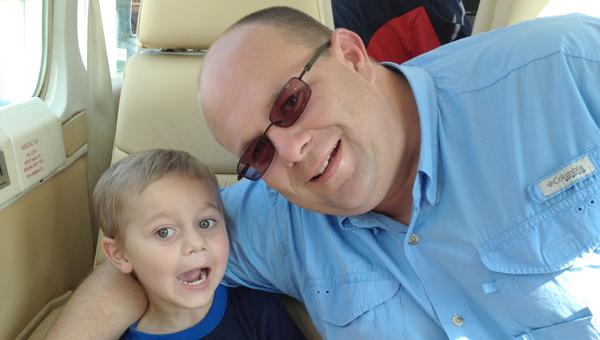 Nate Simmons (left) and Jason Simmons (right) settle in for a flight around Birmingham in a Baron 415 twin-engine plane. The Simmons family took the flight Dreams on Wings, a Birmingham-based program that allows children with debilitating injuries or diseases to fly in airplanes, helicopters and even a hot air balloon. Courtesy Photo

One year ago, the Simmons family would have never dreamed it would be touring old planes and flying around the skies of Birmingham.

In December 2010, the Simmons’ youngest son, Nate, was diagnosed with Acute Lymphocytic Leukemia. Since that time, Nate has been living either in a hospital bed or confined to his home.

However, on May 5, the Simmons family got to participate in the Dreams on Wings in Birmingham.

“Last year, we had applied for a position in the Dreams on Wings program and got accepted, and just three or four days before we were schedule to fly, the tornadoes hit on April 27,” Jason Simmons, Nate’s father, said.

“They were using all of the planes available for rescue and identification of different things. They canceled the whole program for the year. We hadn’t thought anything else about it until they called us and she said ‘we’re flying this Saturday’.”

The program allows children with debilitating injuries or diseases to fly in airplanes, helicopters and even a hot air balloon for free at the Alabama Air National Guard Base at Birmingham-Shuttlesworth International Airport.

More than 40 families, including the Simmons, took part in this year’s event.

“They started (the program) because they were flying kids to treatment and they saw how happy it made the kids,” Simmons said. “They decided to do it once a year to let the kids have fun.”

The Simmons flew on a Baron 415 twin-engine plane that had just enough seats to fit the family of five.

“They flew us for about 45 minutes all over Birmingham,” Simmons said. “We flew right by Children’s Hospital.”

Not only were families able to fly, but they were also allowed to tour some decommissioned planes and jets.

Simmons said he knows there are other children in the city and county that would be eligible to participate.

“We wanted other people to know about it so kids could experience it,” Simmons said. “We would recommend it to anybody that has a child that needs some encouragement or a fun activity in the city or county.”

With numerous doctor’s appointments and the constant traveling to Birmingham and back this past year, Simmons said this was just a way to bring his family closer together.

“Since Nate has been sick, we just want to do anything we can to let him experience life as much as possible,” Simmons said. “It’s to keep him excited about getting better. We want him to experience as much as he can.”

For more information about the program, visit dreamsonwings.org.