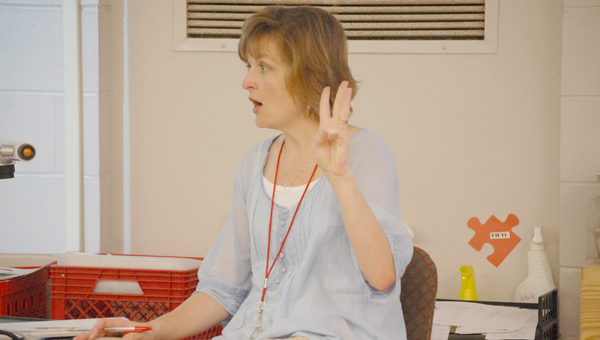 “He that can teach, let him teach.”

Those were the words from the Bible that Kathy Pickens read at the age of 12 that told her she was going to be a teacher.

After 20 years of teaching math to seventh graders at Greenville Middle School, Pickens used those same words to guide her through her speech after being accepted into the Teacher Hall of Fame sponsored by Jacksonville State University.

“We were told by Jacksonville State University that this is the 44th year that they have inducted a class into their hall of fame for teaching,” Pickens said. “Butler County could nominate a teacher from each section of elementary, middle and secondary. I was nominated for my school in the middle school category and then we submitted the paperwork, which involved letters of recommendation from our principal, a colleague and two former students.”

After being selected as a representative for the county, she was then shocked to receive a notification stating she was one of five finalists for the middle school division in the state.

“I kept reading and rereading it and thinking surely not,” Pickens said.

After being invited back to JSU for a ceremony, Pickens was so sure she had not won that while she was at the banquet, she thumbed through the program naming who was going to win from each division.

“It was really neat to be surrounded by winners that you know are as on fire about education as you are and that view it as a calling,” Pickens said.

When Pickens’ name was finally called for winning the middle school division in the state, she “floated” to the podium to say a few words.

“I just mentioned that I’m grateful for all the people that have invested in me and continue to invest in me so that I can turn around and invest that in others,” Pickens said.

“To be singled out when you teach and given an award, it’s a little bit uncomfortable, because you don’t accomplish anything by yourself in education. I was teasing, but I said I would like to thank all the little people because without my students, I wouldn’t even have a purpose, and without my family to support me and my fellow teachers and administrators, I couldn’t do anything. I really do feel like God called me to teach.”

Pickens received two plaques and two certificates as well as $1,000 to spend however she chooses in her classroom.

For Pickens, receiving the award has only strengthened her belief that being humble is extremely important.

“I learned a long time ago that humility is definitely the best way to go,” Pickens said. “I just don’t feel like I can accept an award like this on my own, because there are just too many people that either support me or invest in me to make it possible.”