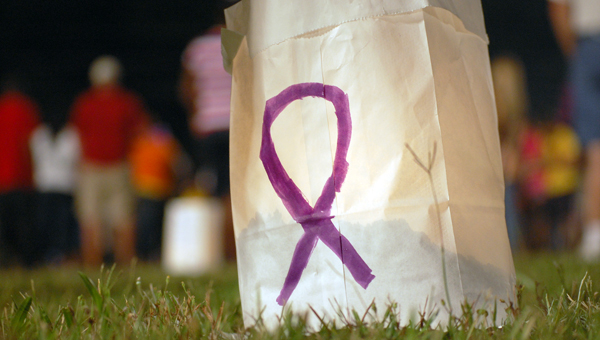 Luminara bags lined the track at the 2012 Butler County Relay for Life. The luminara bags were personalized with names, photos, messages or drawings in memory or honor of a friend or loved one who has been affected by cancer. Advocate Staff/Patty Vaughan

Hundreds of memorable moments were celebrated at the Butler County Relay for Life on Friday, but for Galahad Smith, nothing was more memorable than watching his daughter donate her hair.

“My daughter donated her hair to Locks of Love for her grandmother who just battled cancer,” said Smith, Relay for Life event chairman. “That was certainly the most memorable moment for me.”

About 1,500 people walked through the gates of the Greenville YMCA to not only partake in the numerous planned events but to honor and remember those affected by cancer.

With money continuing to trickle in, Smith said about $75,000 has been collected with the overall goal being $80,000.

Two teams stayed the entire night until 6 a.m., which Smith said hasn’t happened in a number of years.

Amidst the balloon animals, cakewalks and car show, the lights went out and all that remained were hundreds of candles burning in paper bags all in honor of someone who is battling cancer or has lost their fight with the disease.

“I think it really represents the fact that cancer touches a lot of people because most of the people that were there had a family member or someone close that had been affected by cancer,” Smith said. “These people were there for the right reasons, and they were there to support the fight against cancer.”

For more information on the American Cancer Society visit cancer.org.