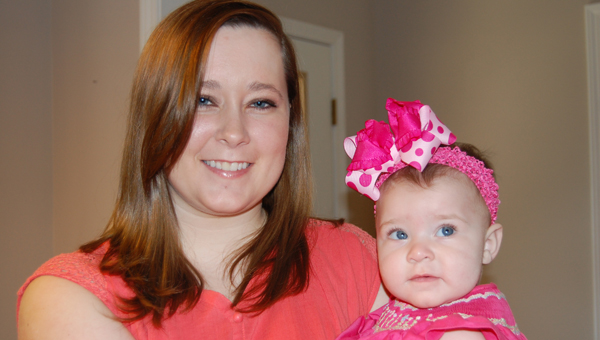 Making bows for her daughter originally started as a hobby for Brooke Walters, but has since blossomed into a small business. Pictured left to right are Walters and Lola Kate Walters. Advocate Staff/Patty Vaughan

What started out as making a wide variety of bows for her 9-month-old daughter turned into a small business in Brooke Walter’s home.

In partnership with her mom, Tammie Hollis, the two formed a double duo in making a variety of bows and bow holders for Lola Kate Walters that transformed into a business called TootandBee.

“From the time (Lola Kate) was born, I had her in bows, but I didn’t make them yet,” Walters said. “I went to order some bows, and they came in, but I just wasn’t really happy with them. I thought maybe I could try to make some.”

With a skill of matching different colored ribbons, Walters worked in an effort to give her daughter pretty things. With the bows rolling in, Walters found she had nowhere to display or keep the bows.

“Before (Lola Kate) was born, we were collecting bows that we liked and (Walters) really didn’t have a place for them, so I made a bow holder,” Hollis said. “I’ve always done that for her since she was little.”

The bow holder process begins with an animal traced out on paper and then transformed into a wooden cutout done by Hollis’s father. The wooden cutout is then painted and brought to life by Hollis. Ribbon is then attached to the bottom of the wooden cutout in long strands where bows can be clipped on for storage.

The bow making process transformed into a small business when Walters went on a trip with her daughter.

“We were taking a trip and every time I had bow on her, someone would say something about it,” Walters said. “I don’t know if it was the bow she had on, but everyone said something. Tons of people said ‘you should sell these.’”

After Walters and her daughter walked into Nancy’s Heirloom Shoppe in downtown Greenville, owner Nancy Faulkenberry fell in love with the bow and had to have it in her store.

With her inspiration continuing to come from her daughter, Walters works at creating unique bows in a variety of sizes.

“She would love everybody with a baby girl to have one of her bows on their head, because she just loves to make them,” Hollis said.

“She just wants them to take off. Just like anyone who makes a craft, they want other people to love their craft. She really enjoys it, and she would just want the business to pick up so she can continue to do it.”