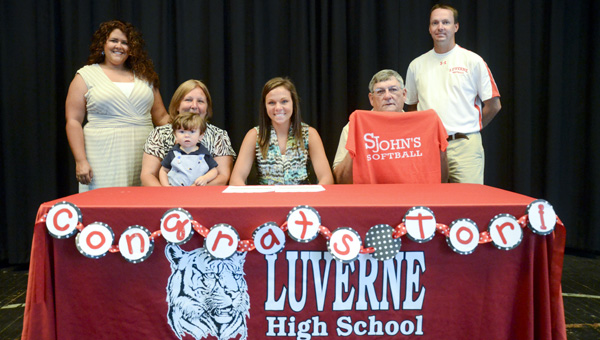 Luverne softball player Tori Free signed with St. John’s University last week, and in doing so, became the first female athlete from Luverne to sign with a Division I school.

Free is a pitcher for the Tigers’ softball team, and she has been getting attention over the last couple of years from several Division I schools.

In addition to St. John’s, Free was also recruited by Villanova, the University of Maryland, and New Jersey’s Farleigh Dickinson.

Local schools also came calling too, such as the University of Alabama-Huntsville and Faulkner State.

“When I visited St. John’s, I liked the small campus,” Free said.

Even though St. John’s is located in the heart of Queens in New York City, Free said it had a small-town atmosphere that reminded her of Luverne.

“When I met the team, it felt like I already fit in,” she said. “Their coach is also really nice.”

By signing with St. John’s, Free puts an exclamation point on a record-setting career at Luverne.

She owns school records in every major pitching category, including wins, strikeouts and no-hitters. She also has the career record for stolen bases.

Free said that she’s been playing softball since she was young, and that she’s always been a pitcher.

In addition to coaching from Luverne’s Dale Simmons, Free played travel softball last summer with a team from Georgia.

“Playing with them helped me get my offers,” she said.

She also refined her pitching to more of a finesse style.

St. John’s recruited Free as a pitcher, and she’ll begin school in the fall.

Is the girl from Luverne worried about moving to NYC, one of the largest cities in the country?

“I’m not that worried about it,” Free said with a smile.