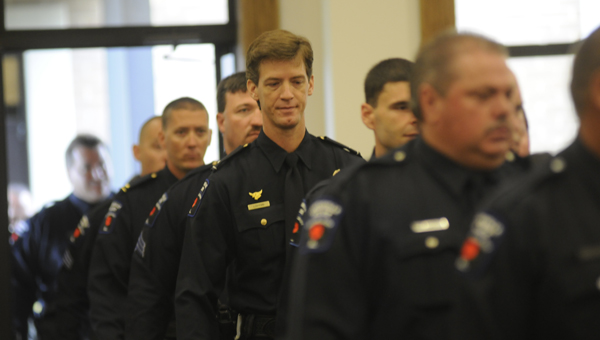 Officers with the Greenville Police Department file into the department's memorial service on Wednesday at the Wendell Mitchell Conference Center on the campus of LBW Community College. The GPD holds the service each year to honor the memory of its three fallen officers. (Advocate Staff/Andy Brown)

It’s been nearly 18 years since Greenville Police officer Gary Wayne Heath was killed in the line of duty.

“Gary was a hometown boy,” Ingram said. “He played baseball here. He graduated from high school here. He always wanted to be a police officer, and after he went off to school he had the chance to come back home and do that. He worked as a patrol officer, and he was a fine officer.”

Heath, along with officers George Bryan and Joe Herring, were honored during a memorial service Wednesday at the Wendell Mitchell Conference Center on the campus of LBW Community College.

“We need to take the time to call these names every year so that we never forget these officers and the sacrifice they made in serving our community,” Ingram said.

District Attorney Charlotte Tesmer, who served as the keynote speaker for the service, called the GPD’s three fallen officers heroes.

“No ceremony, no flag and no speech is going to take away the tragedy (of these officers losing their lives),” she said. “Today is about remembering them, but it’s also about honoring the officers that are still serving our community. All of our officers are heroes. What our officers do allows us all to live in peace, and for that we are thankful.”

Tesmer challenged those who attended to the service to never forget the sacrifice of the three fallen officers.

“Let it be our commitment today to never forget them,” she said. “Let’s strive to complete their mission by keeping the peace.”