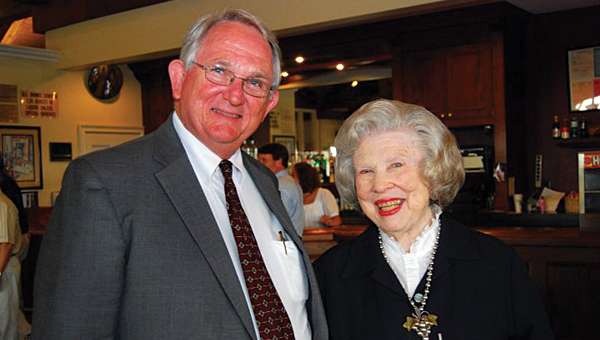 Marianne Stanley Hardin, described by those who knew her best as a sweet, gentle and kind “Southern lady,” passed away Thursday.

On Sunday hundreds filled the sanctuary of Woodland Heights Methodist Church to pay their respects to Hardin and her family.

“She was confident in her faith, her family, and her community,” he said.

Hardin, who was known to most as “Miss Nonnie,” was a former owner of The Greenville Advocate and the wife of William Eugene Hardin, Jr., who served as editor of the Advocate from 1967-1994.

Hardin’s grandfather J.B. Stanley founded the Advocate in 1865 and the family operated the newspaper until 1994 when it was sold to Boone Newspapers.

“Miss Nonnie was a big part of our town,” McLendon said. “Her family owned and operated the Advocate for a long time.

“I always had a lot of respect for the Hardins and for Miss Nonnie. I’m going to miss her.”

“I can’t express enough about what Miss Nonnie meant to this community mostly because of the genuinely lovely Southern lady that she was and for the way she treated people,” she said. “It didn’t matter who it was, Miss Nonnie always had time for a kind word that made that person feel very special. She was the most wonderful lady, and she made everyone feel they were kind, smart and important. Miss Nonnie Hardin was gracious, hysterically funny, Southern to the bone and the kindest person ever. I’ll miss her terribly.”

Gregg Fuller, a longtime employee of the Hardins at The Greenville Advocate, remembered Hardin as someone “everyone loved.”

“She was just a sweet lady,” he said. “I never saw her when she didn’t have a smile on her face. She was just a pleasure to be around, and I’ll miss her.”

Susan Rhodes, another former Advocate employee, has fond memories of the times when Hardin would “stop in” to the office.

“She never worked in the office, but she stopped in quite a bit,” Rhodes said.

“It was always so nice to see her. She was a sweet, kind and gentle lady. I really enjoyed working for the Hardins and thought the world of Miss Nonnie.”

Bill Lewis, a lifelong friend of Hardin’s son Bill, remembers Hardin as someone who always made others feel special.

“She was just a joy to be around,” he said. “She was always more concerned with making you comfortable than making sure she was comfortable and she had a way of making you feel special every time you saw her. She was just always glowing. She was one of the most unique and sweetest people I have ever met. She was family to me.”

Frank Hickman, who knew Hardin since the early 1970s, described her as a “special Southern lady.”

“Miss Nonnie was one of the most gracious ladies I have ever met,” Hickman said. “Whenever you were around her you had a true sense that she was really interested in you. Sometimes people will say hello to you, but as they do so they are looking behind you to see who else is coming. Miss Nonnie never did that. She was always polite and courteous and had a way of making you feel special anytime you were around her. I always looked forward to seeing her, and will certainly miss her.”

Butler County Circuit Clerk Allen Stephenson, who worked for Hardin at the Advocate and also served with her in the Butler County United Fund, said Hardin was a “major part of his growing up.”

“She was a wonderful person,” he said. “She was an essential part of the United Fund. She was always a trustworthy person who took responsibility for everything she did.”

Annabel Markel, regent of the Fort Dale Chapter of the Daughters of the American Revolution, said that Hardin was an “important person” in the local DAR chapter, which was organized in 1962.

“She was a charter member of our chapter,” Markel said. “She was the recipient of our Community Service Award some years ago for her volunteer service in her church, with the garden club and for her service to seniors.”

Markel said Hardin was a “Southern lady with a capital ‘L’” all the way to the end.

“I have known her all of my life and have never heard her say one disparaging word about anyone in all of that time,” she said. “… She always portrayed a very pleasant and exuberant personality, and she was willing to help others at any time. Nonnie will always be remembered for her graciousness, wonderful disposition and kindness to others.”

“The programs she would give were filled with personal accounts of the affects of war on her family and the families of Greenville,” Poole said. “The first-hand stories she could recall from her grandparents, and parents made me feel so close to the tumultuous times during the War Between the States, WWI and WWII. She was a wealth of knowledge and her programs were like mini-history classes. What I will miss most about Nonnie is her smile, wit, charm, genuine warmth and elegance; she was the epitome of the Southern lady. Never have I heard her utter anything unkind or controversial. Her vocabulary had to have been void of all unpleasant words. To me, her most endearing habit was wearing a camellia bloom lovingly on her shoulder — nothing could be more southern, but the flower paled in comparison to her beautiful face and loving smile; that is the picture of her I will forever keep in my mind. She was indeed a treasure to all who were blessed to know her.”

Hardin, who was a member of the Pride of Greenville Garden Club, also had a passion for flowers, which could be traced at least in part to her father J. Glenn Stanley’s love of camellias.

Stanley was instrumental in Greenville becoming known as “The Camellia City.”

In October of 2010, Hardin helped dedicate a historic marker on the grounds of City Hall honoring the heritage of Greenville and its history as the Camellia City.