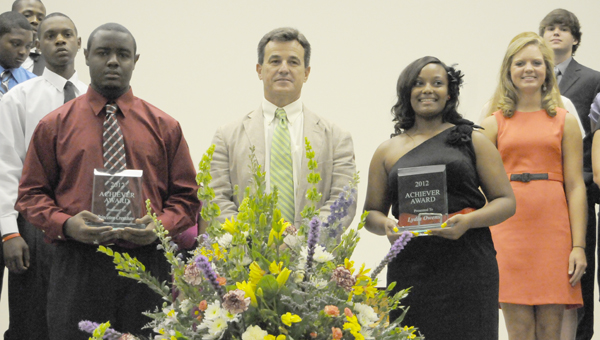 When Lydia Owens stepped behind the microphone after being presented the 2012 Achiever Award, she wasn’t quite sure what to say.

“I knew I should have prepared something,” she joked.

It didn’t take long for the McKenzie School senior to figure out just what she wanted to say to the hundreds of people gathered at First Baptist Church for the 15th annual Achiever Award Banquet.

“I give all the honor to God,” she said. “I’m blessed to have this opportunity, and I want to thank my teachers, my family and my friends for supporting me and pushing me to work hard.”

As the 2012 recipients of the award, Owens and Greenville High School’s Princeton Crenshaw each received a $1,500 scholarship to be used at the college or university of their choice.

Both Owens and Crenshaw said they were surprised to be selected as the award winners given the impressive credentials of the other 21 nominees. The Achiever Award recognizes one male and one female student athlete from area schools who not only excel in the classroom and on the playing field, but also in church and community involvement.

“I’m very honored to be included with all the past winners,” Crenshaw said. “Everyone here is deserving, and to be selected really means a lot. I know how much this award means to our community and I’m honored to have received it.”

Crenshaw, who was a member of the GHS football and track & field teams, said he plans to attend LBW Community College this summer and transfer to Auburn University in the fall to major in pre-engineering.

“This has been a great experience,” Crenshaw said. “I just want to thank God because without him this wouldn’t be possible. I also especially want to thank my mother and stepfather for supporting me.”

Owens, who plans to attend Alabama State University and major in recreational therapy, still couldn’t believe she won even as she grasp her glass trophy.

“It’s overwhelming,” she said. “It still hasn’t set in. I don’t know if it will until they announce it over the intercom at school, and even then it might take a while. It’s just so humbling to be chosen.”

As a player, Jones was an All-Southeastern Conference performer at the University of Alabama, where he began his playing career under legendary coach Paul “Bear” Bryant.

After beginning his career as a sixth-string wide receiver, Jones finished his career with 71 receptions, 1,386 yards and 15 touchdowns, ranking fourth on the career touchdown receptions chart and seventh in career receiving yards.

He was named to Alabama’s All-Decade Team for the 1980s and played professionally with the Birmingham Stallions of the USFL and the NFL’s Atlanta Falcons.

Jones said he went into coaching to be able to “influence young people” like the 23 Achiever Award nominees.

“I have to win games to keep my job, but the bottom line is I do what I do because I want to help change the lives of young people,” he said.