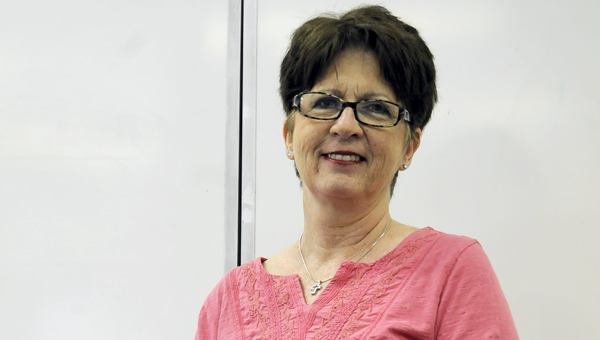 Fort Dale Academy’s Susan Foster was recently named AISA Teacher of the Year for secondary education. Foster has been teaching at Fort Dale since 1981, and is the school’s third recipient of the award in the last four years. Advocate Staff/Andy Brown

Susan Foster didn’t set out to be a teacher.

She planned to use her love of mathematics to become an engineer. But with no engineering program at AUM, Foster elected to give math education a try. It’s a decision she says she has never regretted.

“It’s like that old saying, ‘Do what you love and you will never work a day in your life.’ That’s been true for me,” Foster said.

Foster, who has been teaching at Fort Dale Academy since 1981, was recently recognized by the Alabama Independent School Association as its Teacher of the Year for secondary education. She is the third member of Fort Dale’s faculty to receive the honor in the last four years. Starla Jones, who no longer teaches at the school, and Marcia Davis won the awards in 2009 and 2010, respectively.

“It’s a tremendous honor,” Foster said. “I’m thrilled to have been chosen, but I was really surprised when I found out. When I turned in my résumé, I thought there was no way I’d get (the award). I still can’t believe it, but I’m thrilled.”

Foster may have been surprised, but Fort Dale headmaster David Brantley wasn’t surprised in the least.

“She is very deserving of the honor,” he said. “She is not only a wonderful teacher, but she’s a wonderful educator. She doesn’t stop at teaching math. She talks to her students about being responsible and working hard for the things they want. She means so much to our school. She really has become the identity for Fort Dale in a lot of ways.”

Foster, who teaches seventh and eighth grade math and Algebra I, says she enjoys teaching as much now as she did the first time she stepped into a classroom.

“I’m the happiest when I’m in the classroom with my kids,” she said. “This is where I want to be. I don’t want to be a principal or out front, I want to be right here with my children.”

Foster, who has a master’s degree in mathematics, said she is “passionate” about teaching – not necessarily teaching math, but teaching her students to succeed.

“Math isn’t really what I teach,” she said. “I want to teach critical thinking. I want my kids to be patriotic and care about the environment. I want to teach Christian values and encourage honesty in my students. I want them to have a great work ethic. I understand that everyone doesn’t like math. I don’t like history, but I also want them to understand that just because we don’t like something doesn’t mean we don’t have to do what we’re supposed to do. I want to teach my children the skills they need to be successful in life.”

It’s those lessons she teaches daily in her classroom that Brantley said made her an obvious choice for AISA Teacher of the Year.

“She means so much to our school and our students,” he said. “She goes above and beyond what is expected of her because she cares so much for her students. I can’t think of anyone more deserving of this honor.”