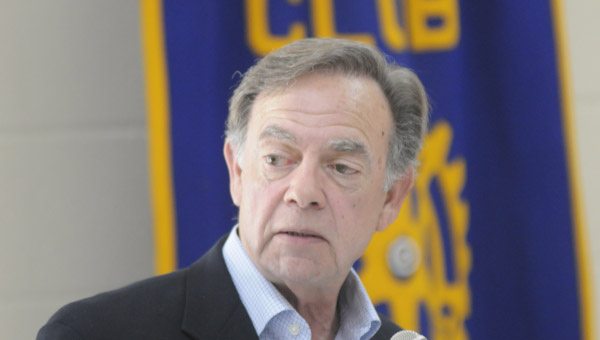 When it comes to Alabama politics, there is perhaps no one more well known than George C. Wallace.

But while many know of the former governor’s political accomplishments, there’s another side of Gov. Wallace that may not be quite as well known. It’s that’s side of the legendary politician that led his son, George Wallace Jr., to pen the book Governor George Wallace: The Man You Never Knew.

“This is a book I never intended to write, but there was a man in my father that people never really knew, and I wanted to share that with others,” Wallace said.

The book chronicles the former governor’s life from growing up in Clio, to his rise to the state’s highest office and his run for president, to his death in 1998.

The book also deals with the issue of segregation, which in many respects made Gov. Wallace a polarizing figure across the nation.

In that election, John Malcolm Patterson defeated Wallace in Alabama’s Democratic primary. It proved to be a political crossroads for Wallace. Patterson ran with the support of the Ku Klux Klan, an organization Wallace had spoken against, while the NAACP endorsed Wallace.

“Gov. Patterson was elected on the issue of segregation,” Wallace said. “My father learned from that. He was very ambitious, and he learned that segregation was the issue people wanted to hear about, so in 1962 he turned up the heat.”

The move paid off and Wallace was elected in a landslide in 1962. In his inaugural speech, Wallace said, “In the name of the greatest people that have ever trod this earth, I draw the line in the dust and toss the gauntlet before the feet of tyranny, and I say segregation now, segregation tomorrow, segregation forever.”

According to Wallace, it’s a stance his father later regretted.

“He understood, because of his ‘Segregation Forever’ speech and his, ‘Stand in the Schoolhouse Door,’ that the issue of race while bringing him to power, would prove to be the burden he would have to bear until eventually through his suffering, his own sense of our common humanity was revealed to all,” Wallace said. “The bargain he had made on the issue of segregation gave to him the power he had always sought, but this bargain also brought him many regrets.”

The book, which features 333 photos of Gov. Wallace, also addresses the assassination attempt on his life during his run for president in 1972 and his faith, which sustained him during the many years he spent confined to a wheelchair after being shot five times by Arthur Bremer.