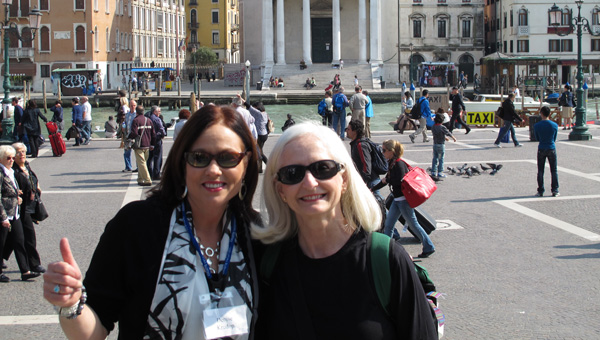 Venice waterways, marble columns and artwork around every bend were just some of the things members of the Senior Circle experienced on a recent trip to Italy.

In March, a group of 16 members from the Greenville area traveled to Rome, Florence, Venice and Milan after joining a few other groups from all over the country.

Holly Krudop, a member of Senior Circle, described the trip as nothing less than extraordinary.

“I totally was in awe of everything that we saw,” Krudop said.

The group spent just more than a week in Italy and was able to see churches, museums, coliseums, artwork and a winery, while also experiencing a wide variety of Italian food.

“Part of the package was that you have several dinners that were paid for,” Krudop said. “(The dinners) were pretty long and involved. The Italians enjoy relaxing and visiting.”

Linda Holley, director of Senior Circle, was able to organize the whole trip based on where people said they wanted to go.

“When we do travel, I just ask our members if there is anywhere they would like to go and there were quite a few that wanted to go to Italy,” Holley said.

With the package, members were able to participate in group activities as well as individual site seeing.

“We had a little miniature opera as part of our tour package,” Krudop said. “Another thing is we went to a winery and saw the groves, and another option was to see Rome at night with fountains lit. Sometimes it was a choice and sometimes we did things as a group.”

The trip to Italy was just one of many trips that the group has gone on, according to Holley. The group has traveled to places like Australia, Hawaii, Alaska, New Zealand and Nova Scotia.

“When I first started 13 years go, they said I had to develop a strong travel program here,” Holley said. “That’s just part of the Senior Circle benefit is being able to travel.”