Payne returns for “Putting on the Ritz” 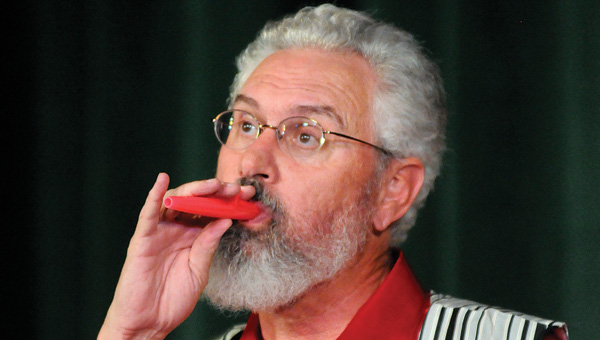 Greenville native Tom Payne is one of a handful of Ritz Players that has performed in every “Putting on the Ritz” production. Payne and the rest of the Ritz Players will debut this year’s production Thursday at 7:30 p.m. at the Ritz Theatre. Advocate Staff/Andy Brown

Don’t get in the way.

These are all lessons Tom Payne learned from Roberta “Bobbie” Gamble when she invited the then sixth-grader to perform in a production of “Hello, Dolly.”

Payne played the role of a waiter. It wasn’t a big role. He danced a little and sang a little, but he mostly just blended into the crowd. Still, Payne shined in his role.

“A good extra is hard to find,” he joked.

While his first role may have been small, it sparked a love of the theatre — one that has kept Payne performing.

On Thursday, Payne’s love of the theatre will once again lead him onto the stage at the historic Ritz Theatre as he takes part in the Greenville Area Arts Council’s annual “Putting on the Ritz” production. Payne is one of a handful of Ritz Players that has taken part in every “Putting on the Ritz” performance, including a surprise show for Gambles’ 80th birthday that was the catalyst for the future productions.

“It’s been a lot of fun,” he said. “I guess that’s what keeps me coming back. I don’t know if I could say that this show is my favorite or that show is my favorite. That’s sort of like choosing which one of your children is your favorite. Each of them has been special in their own way, but probably the most special was the first one. It’s hard to surprise Miss Bobbie, but she was surprised that night.”

Over the years, Payne has seen the shows grow.

“They’re much more elaborate now,” he said. “From the costumes to the complexity of the music, it seems to grow each year.”

This year’s show, “Come Be Our Guest,” is expected to be one of the most elaborate with bright costumes and big musical numbers from Disney classics such as The Lion King, Beauty and the Beast, the Little Mermaid and 101 Dalmatians.

“I think it’s going to be fantastic,” Payne said. “It’s a show that has appeal for adults as well as kids all the way from pre-kindergarten to senior citizens. It’s going to be a good, and I’m really proud to be associated with the whole project.”

The show will debut Thursday at 7:30 p.m. at the Ritz Theatre. There will also be performances on Friday and Saturday at 7:30 p.m. each night. Tickets for the show can be purchased at The Pineapple.