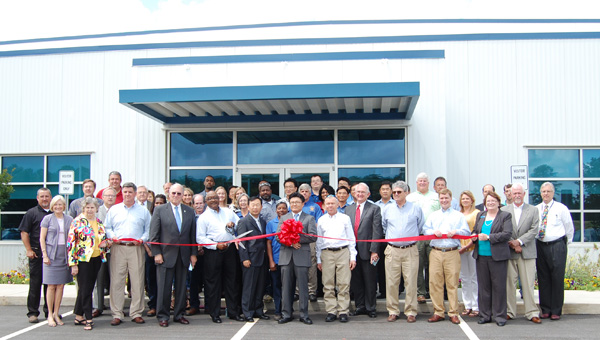 Hwashin America held a ribbon cutting on Thursday to officially dedicate a 120,000 square-foot addition to its facility. Advocate Staff/Patty Vaughan

Hwashin America is creating parts for more than 16,800 automobiles a week.

Just as importantly, the company is creating jobs.

Since the beginning of 2011, the company has added 107 jobs, which brings the total number of employees at the Greenville facility to 555.

“I just want to say that having Hwashin here in Greenville is certainly a blessing, not in disguise but in reality, because we have seen the direct results of Hwashin being here,” Greenville City Councilman Jeddo Bell said. “I remember back when the unemployment rate was at 18 percent and it is no longer 18 percent. That is partially because of Hwashin coming to Greenville, and we appreciate that very much.”

Hwashin has certainly played a role in the county’s unemployment rate dropping.

“(Kia) amped up their production quite a bit,” he said.

The increased production also led to an expansion.

“We are a high-volume producer,” Malak said. “We’re producing parts for 2,800 vehicles per day and that includes Saturday.”

According to Malik, Hwashin has also added a new stamping line. The total investment for the company’s expansion totals $18 million.

Alabama Economic and Community Development Director Chuck Carver said Hyundai and Hwashin have been very good for the state.

“I think the people of Alabama very much appreciate what you have done at this wonderful manufacturing plant that you have created here,” Carver said at the ribbon cutting. “This is the baseline for prosperity.”