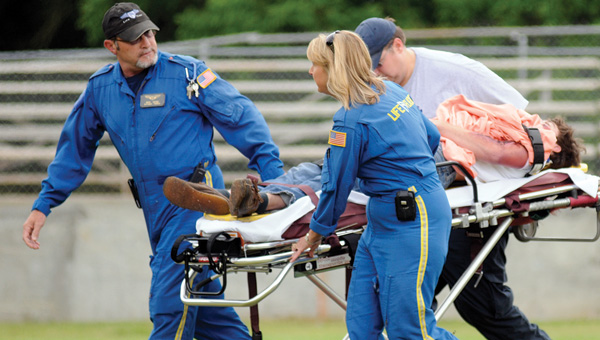 A Life Flight crew rushes an injured man from the scene of an accident during a scene from McKenzie School’s second annual Prom Promise Skit. Advocate Staff/Andy Brown

First responders with the Butler County Sheriff’s Office, McKenzie Police Department, South Butler Fire and Rescue and Life Flight rushed around McKenzie School on Thursday working to free a man and woman from a pickup truck that was crushed after being struck by a drunk driver’s vehicle.

A crowd of onlookers watched as the driver of the truck was airlifted out to a Montgomery hospital to receive treatment for life-threatening injuries. The man’s wife was transported to a local hospital, while the couple’s daughter was pronounced dead at the scene after being partially ejected from the vehicle.

Fortunately, the sobering scene was part of McKenzie School’s second annual Prom Promise Skit, and not an actual accident.

The skit followed a McKenzie School graduate from his graduation ceremony, to an after party involving alcohol and his decision to drive under the influence, to the fatal accident and the graduate’s eventual sentencing for the murder of the child killed in the wreck.

“I think the show went well,” said Brandy  Moseley, McKenzie School teacher and event organizer. “There were tons of kids that were affected by the skit. I saw kids crying and realizing that it could be them.”

Students from both McKenzie and Georgiana School were on hand and had the chance to hear from 2010 McKenzie School graduate Chelsea Huggins, who suffered a spinal cord injury in October of 2010 when the vehicle she was traveling in left the road and collided with a tree. The driver of the vehicle had been drinking alcohol and was driving at a high rate of speed, according to Huggins.

“I’m not saying that things would have been different if the person driving hadn’t been under the influence, but it could have been,” she said.

The accident left Huggins paralyzed from the chest down.

“When we left the road I saw that we were heading toward the trees,” Huggins said. “… I closed my eyes and braced myself to hit the trees. I felt some shaking, but no pain. When I opened my eyes, I was on the ground and I saw my friends getting out of the Jeep. I tried to get up and couldn’t.”

Huggins was eventually flown by Life Flight to a Mobile hospital where she spent 11 days before being moved to a rehabilitation clinic in Atlanta where she spent four months.

Huggins told the students that the decision to ride with a driver under the influence and the accident have forever changed her life.

“I thought when I came home things would be the same, and they weren’t,” she said. “Things won’t ever be exactly like they were.”

As the crowd listened silently, Huggins shared one final thought.