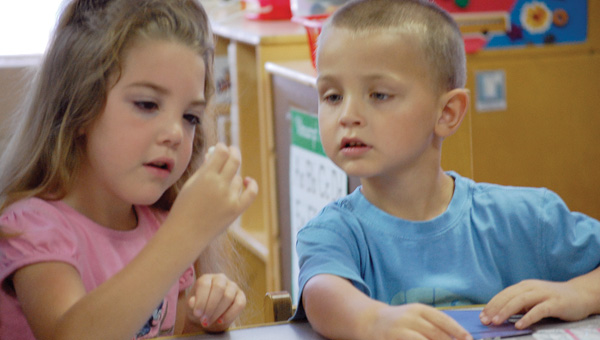 Riley Dewberry (left) and Hunter Morgan (right) participate in a small-group activity at Bright Beginnings Pre-K in Greenville. Alabama’s First Class Pre-K program has been ranked No. 1 with the help of Bright Beginnings meeting all 10 standards. Advocate Staff/Patty Vaughan

For the sixth year in a row, Alabama’s First Class Pre-K program has been ranked No. 1.

Bright Beginnings is funded 85 percent by grants from the OSR and the remaining 15 percent comes from tuition.

“In 2006, we tied for the number one ranking for quality Pre-K with North Carolina and have met all indicators to keep that number one status each year since,” Bryan said. “However, in 2011, four states besides Alabama met all 10 standards.”

Each program must meet the standards to achieve the ranking, Bryan said.

“(Alabama’s First Class Pre-K program) ensures that Bright Beginnings meets those high standards before they award quarterly,” Bryan said. “All Bright Beginnings Pre-K classes are monitored monthly with a site visit by a technical assistant from the Office of School Readiness to further ensure compliance with all requirements of a good, quality early learning experience.”

With large cuts in many of the states this year, Bryan said it is a great feat that Alabama is still ranked number one.

“The big story this year was that funding was cut for most states and all states are serving a pathetically small number of students,” Bryan said. “As an example, though Butler County has over 300 kindergarten students, we have only 90 slots available in Pre-K.”

Bryan said this is just another recognition that this program instills early school success for students.

“Eventually, I believe Pre-K will become as widely accepted and funded as kindergarten is now,” Bryan said. “Educators, politicians, and business people all see that the investment in early learning pays great dividends by saving on costs for special education programs, intervention and remediation programs, dropouts and eventual dependence on the government by those students who enter school behind and never get a strong foundation.”